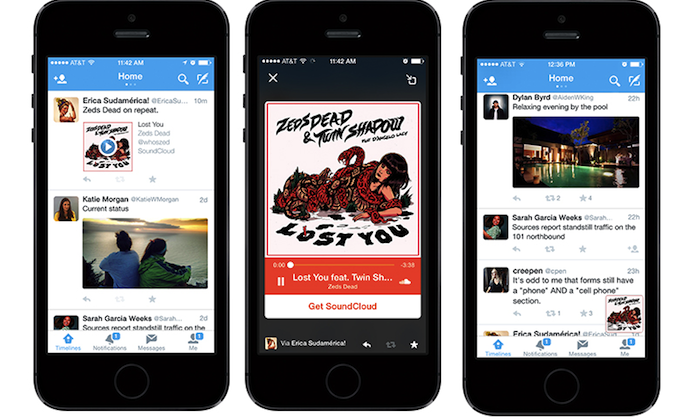 The Audio Card is a new feature that allows you to listen to music on Twitter. It is experienced with Apple's iTunes and SoundCloud.

The adventure was cut short for Twitter #music. But at the announcement of its closure, Twitter hinted about future retries in the field of music. One of them takes the form of Twitter Audio Card.

This feature is already used by SoundCloud and iTunes from Apple. On Twitter.com and mobile applications with Android and iOS, it lets you listen to music while browsing the news feed.

In principle, there is nothing really revolutionary. With a tweet that offers such content, listening to a title is possible after a click (supported by the platform of streaming partner). On mobile, it can be listened to with information in full screen or minimized to continue browsing without interrupting the audio stream.

It is a way for Twitter to expand its range of available content with a promise:
"We're just beginning to test the Audio Card and expect to make it available to more partners and designers in the future so that many more artists share exclusive tracks with millions of listeners on Twitter."

We can find here a list of artists already involved, as well as the following account @TwitterMusic.