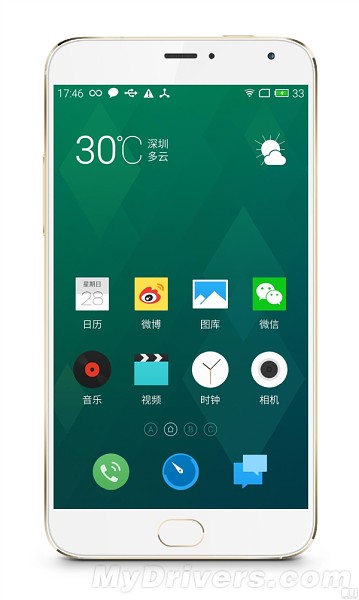 While it must be submitted within a week, the smartphone Meizu MX 4 Pro continues to show in screenshots through leaks on the web. Today, we are faced with the official visual appearance.

Meizu MX 4 Pro smartphone, which is similar to the premium version of a recently arrived smartphone below 300 euros model and that we would normally see on the October 28, or in a week to the day continues to show on the Web.

In recent photos, which are quite formal, we can see both black and white finishes. We also have an overview of the main button which will probably house the fingerprint reader that is part of the big differences.

According to the information gathered here and there, the Meizu MX4 Pro smartphone retains the diagonal of 5.4 inches, but increased to 2K/QHD definition (against Full HD). It also comes with MediaTek octa-core platform against SoC Samsung Exynos 5 octa-core. Other big news in relation to the basic version: the fingerprint reader already mentioned above. Furthermore we would find that the 20.7 megapixel digital camera is originally from Sony and Android 4.4 KitKat environment with Flyme OS wrapper.

As interesting as it is, on paper at least, not sure if this smartphone Meizu MX4 Pro will launch in Europe. It might indeed be limited to some Asian markets, including China.