BlackBerry announces an update of its BBM instant messaging application for its mobile OS as well as for iOS and Android.

To return to the market of mobile messaging, BlackBerry has chosen to catch up by implementing the features of competing applications targeting both the general public and professionals.

After a few days of beta release, the new version of BBM is based on Snapchat and introduces the possibility of disseminating ephemeral messages. The sender can therefore send a text or photo of your choice and make them accessible for a few seconds.

Meanwhile, the company has the ability to recall a message after sending it, for example if you took the wrong recipient. It will be automatically deleted from the servers of the company and the change will be made on the thread of the recipient. More specialized and focused on mail privacy already offer such a mechanism, the image of TigerText or CoverMe. 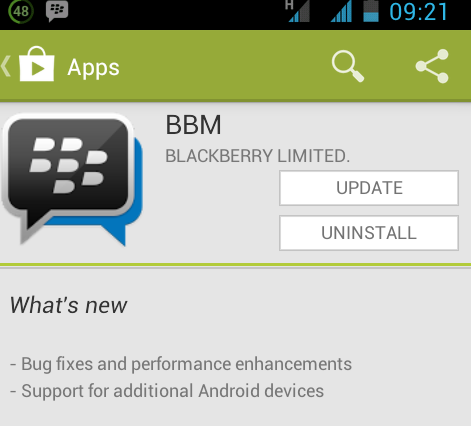 With this new version, available soon on BlackBerry 10, Android and iOS, it will also be possible to send high-quality pictures and take note of songs heard through its contacts. Finally, the insertion of stickers in a conversation has been optimized.

No information about an update for Windows Phone has been provided. BlackBerry explains that these new products will be offered for free in the course of the next three months before being integrated within a broader subscription.