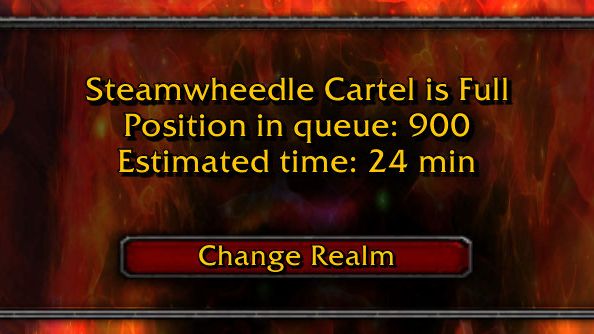 We were talking about it a few days ago, the launch of the latest extension of World of Warcraft is made in the tradition: a total chaos with waiting extending files. But once again, Blizzard made some amends and announced compensation for players.

With each release of a new extension or a new title, Blizzard is unable to hold charging crowds of users who want to try out the productions of the publisher. And this is again repeated with the release of Warlords of Draenor, the new WoW expansion that has led to a saturation of the servers.

So that everyone can still enjoy the title, or try to enjoy it, Blizzard had implemented a system of waiting that sometimes stretched beyond 10 hours queue.

On the sidelines of this, even when entered into the realms of the game, all was not as simple. Between parts of purely inaccessible game (fiefs) yet mandatory step, and the ubiquitous lag, the experience was enough to frustrate during peak hours.

To make matters worse, Blizzard US was the victim of DDOS attacks repeatedly, which made flinch part of its services and led to even more disruption.

Only the less populated realms located in Europe were partially spared from this hassle. Blizzard has offered the opportunity to transfer its characters free to other servers.

But it does not stop there, after the shared community apology, Blizzard also announced to compensate players whose experience was disrupted for a few days. J Allen Brack has said that "The quality of content is not enough to compensate for the inconveniences that accompanied the launch of the [extension]", whereby players who were active as of November 14 will be entitled to 5 days Free subscription to the title.

Compensation should happen gradually on all player accounts.