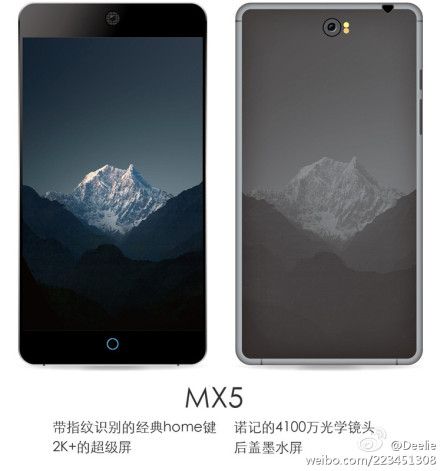 Faced with a pervasive competitor Xiaomi, the Chinese manufacturer Meizu has not said its last word and the next flagship, the Meizu MX5, promises enticing features.

The new Chinese manufacturers of smartphones in the fight to offer smartphones with high-end features is yet to be offered at very aggressive prices. The brand Xiaomi is now establishing itself as a major player in this new scene but its rival Meizu does not intend to lose ground.

And if you believe the rumors about an upcoming Meizu MX5 smartphone, which would take the rest of the Meizu MX4 and its variants is a new racing machine ahead. And since it is already spreading the rumor of a Xiaomi E5, Meizu MX5, Chinese manufacturer unofficially will appear as a respondent.

The future therefore embarks smartphone display resolution of qHD/2K (2560 x 1440 pixels) and proposes a 41 megapixel camera module at back. So far, only the Nokia Lumia 1020 PureView proposed such a sensor.

A biometric fingerprint reader is also present and located under the screen and the Chinese source mentions the presence of a secondary display. Finally, a report of alleged Meizu MX5 was broadcasted on Chinese social network Weibo. We can probably expect an announcement of the smartphone early next year.