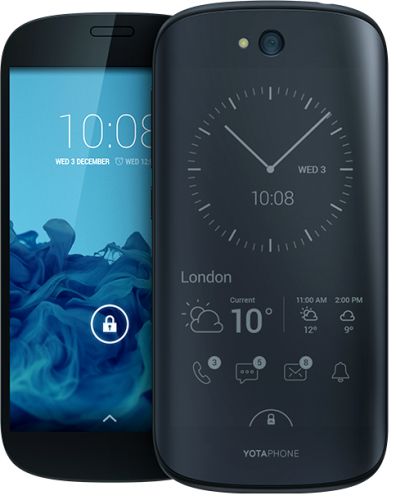 The second generation of Yotaphone, smartphone with an LCD display and an e-paper Display at back, unfolds and landed this month in Russia.

The Yotaphone had marked the spirits by the presence of a second screen to the back of the unit and using e-paper technology with very low power consumption for display notifications and other practical information without having to activate the main screen.

The e-paper display is an interesting solution for mobile devices, but its limitations (monochrome display, inability to display videos, etc) make it difficult to make the main display of a smartphone.

By making a secondary screen at the back of Yotaphone the Yota Devices company has found a way to integrate it appropriately in a mobile product. After a first model that has toured the technology fairs, it is a Yotaphone 2 which is now announced.

The Yotaphone 2 operates on a platform of Snapdragon 800 quad-core 2.2 GHz associated with 2GB of RAM and 32GB of storage memory. It also has an 8 megapixel camera with autofocus and LED flash on the back and a 2.1 megapixel camera at the front.

The smartphone is 9 mm thick and has wireless connectivity of WiFi, Bluetooth, NFC, GPS/Glonass Module and a micro USB 2.0 port. Note that the 2500 mAh battery can be recharged wirelessly.