The Japanese brand Toshiba launches a large Android Touchpad. Too bad that the features are not as XXL with that of the diagonal.

Referenced as TT301 and called as The Shared Board, this 4 kg tablet offers a diagonal of 24 inches (61 centimeters) in Full HD (1920 x 1080 pixels), integrated audio system of 2 x 2 Watts and is accompanied with an infrared remote control, which can also show a small video screen for the family or can be used as a touch pad. Its ability to display two applications at the same time also opens the way for use in the workplace.

As for its technical specs, the choice fell on a dual-core 1.0 GHz processor (not accurate but we think an Intel model) and a RAM of 1.5GB. Technically, one also speaks of a space of 16 GB for the reception of data and connectivity of Wi-Fi/Bluetooth for network connection and accessories such as keyboard. As for the OS, it is an old Android 4.2.1 Jelly Bean. 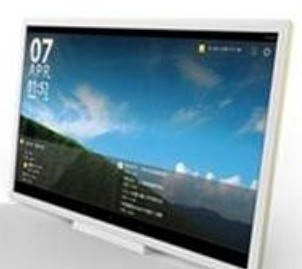 No information for now regarding distribution outside of the Japanese country so far is given.