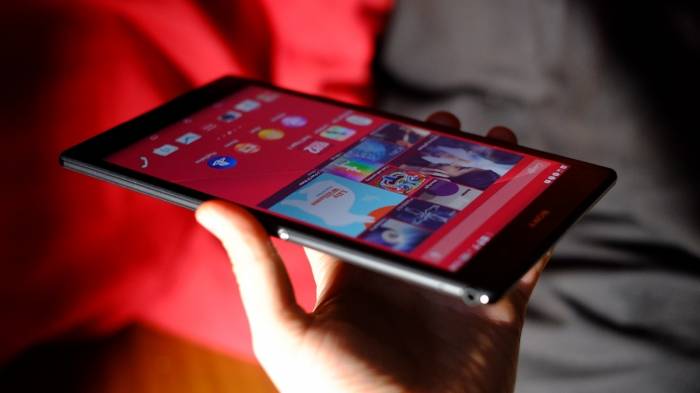 Sony could begin to turn to the large touchpads with a Xperia Z4 Ultra Tablet model with a 12.9-inch display.

Samsung has opened the way for large shelves in early 2014 with models like Galaxy NotePro and Galaxy TabPro offering both displays at 12 inches. While Apple is expected to follow the same track with a tablet of iPad Pro or iPad Air Plus next year, it's Microsoft who also turned to 12-inch screens with its series of Surface Pro 3.

Other manufacturers are likely to test this format in the near future and one of them could be the Sony group. Rumor has already run that the manufacturer must launch a large tablet early in 2015 but for now the characteristics of the latter may have emerged on the Web.

Unofficially from the Chinese source, there will be a Sony Xperia Ultra Z4 Tablet with a large Triluminos screen of 12.97 inches with technology and X-Reality and with an impressive resolution of 3840 x 2400 pixels resolution.

The processor would be a platform of Snapdragon 810 clocked at 2.86 GHz with 6 GB of RAM and 64GB of ROM. 8 megapixel sensor with Carl Zeiss optics would also be included, with video recording capability of 4K at 30 fps.

Finally, the Xperia Z4 Ultra Tablet would have a massive 12,100 mAh battery. Too good to be true? No doubt, but this new rumor continues to fuel the assumption of a large tablet by Sony.