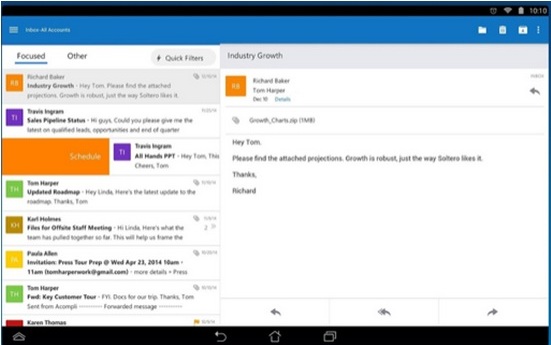 Microsoft Outlook Preview has finally landed on Google Play Store. This is a new app that brings you a fixed version of mail client to sync your live accounts on Android platform. It is just released and has a simple to use UI. It is a free application. But this is also not the final version. It is a new edition that lands under a Preview tag. The final will appear soon with more bug fixes and performance optimization. Microsoft Office app is already available on Google Play. This consist of full office package like Microsoft Word, Excel, PowerPoint and OneNote. outlook is not included in them. Internally Android has a option through which you can sync your Live account without needing a dedicated mail client. But here Microsoft Outlook Preview will enhance your usage on Android tablet and Smartphone due to a fluid UI.

Microsoft Outlook Preview is a powerful mail client that can help you to sync more than one live mail accounts on the app. You can manage all your emails, you can simply handle the attachments and also you can integrate your live calendar in it. So that you don't have to rely on any third party app stuff. The app brings up many effective functions to work with your emails. Like you can just split the UI into two tabs among which you can keep all your important messages at one side and work with your other interactions.  It is very much similar to Google Priority. The app works through IMAP. There is on POP support in it. 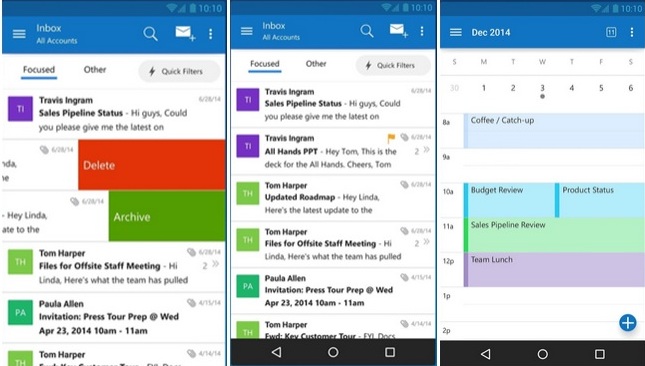