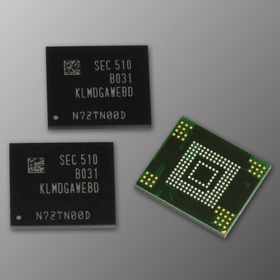 While the high-end smartphones will take advantage of the storage space of 128GB UFS, Samsung does not forget the midrange devices with new modules of 128GB of eMMC 5.0.

Smartphone storage capacity usually extends from 16GB to 64GB but changes in uses and technical improvements will lead them to evolve. While the 16GB begins to overshadow the high-end segment, the Samsung Group anticipates that demand for higher capacities on different segments.

The Korean giant announced there are few modules of UFS 128GB memory for high-end mobile devices, which will enable them to take advantage of approximating SSD solutions for computers.

This capacity should be until mid-range scope with new memory modules of 3-bit 128GB eMMC 5.0 also produced by Samsung. Capable of delivering read speeds of around 260 MB/s, they have 6,000 IOPS read and 5000 IOPS write processing capabilities, enough to ensure the management of high definition videos.

These IOPS capacity are respectively 4 and 10 times those of an external memory card reader, said the Korean group, but they are far from over 10,000 IOPS license eMMC 5.1 and 19,000 IOPS for UFS. The capacity is not everything.