Karbonn Mobile has recently launched a 4.3-inch display based Smartphone which can be a strong competitor for Micromax A100 and other 4-inch display phones. This new model is called “Karbonn A18”, a budget phone, now available in India in range of Rs 9400 to Rs 10000. The device comes with Dual-Sim slots that allow you to use two GSM sim cards at the same time. Featuring 5MP primary and 1.3MP front camera, A18 is also good for capturing your favorite moments in HD quality. Lets checkout it’s features one by one in this review. You can check the complete Video Review of this smartphone here.

If we talk about its design, Karbonn A18 looks very similar to Apple’s iPhone if we see it from front or sideways because of its silver border with matte finish. On the front side on the top, there is a 1.3 megapixel camera and call speaker. At bottom, there are 4 touch sensitive buttons consisting Home, Settings, back and search.

There is nothing on the right side body, on left side – volume up/down buttons are placed. On the top side there is 3.5mm headphone jack, Power Button and USB/Charger port, Mic is placed at the bottom. On the back of the phone we find 5MP camera with Flash light and also the loud speaker with Karbonn logo. 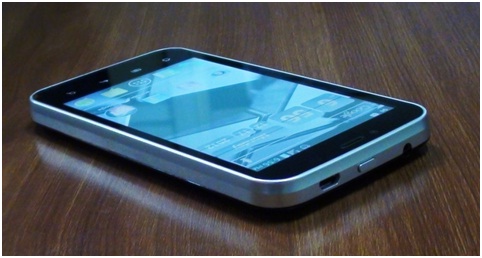 The body is made up of plastic, doesn’t seems too strong hence you should be very careful while opening the back cover. Under the back cover you will find battery, slots for two Sim cards and a MicroSD Card slot. Overall the design is good and comfortable to hold in a hand. 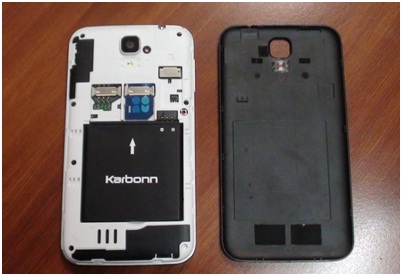 The best thing I liked in A18 is its 4.3inch large IPS LCD capacitive touchscreen display with very good touch sensitivity. The resolution we noticed on this screen is 480 x 800 pixels. Another best feature of this IPS panel based screen is no matter from which angel you watch; you will see the screen very clear. It also offers very good experience while watching HD videos or playing video games. I can say that this is the best ever screen we have seen so far in any of Karbonn smartphones. 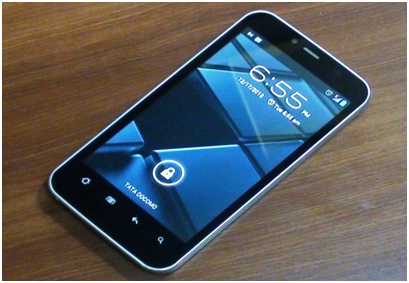 Karbonn A18 is running on Android 4.0.3 (Ice Cream Sandwich) operating system; it’s not sure though whether it will be getting Jelly Bean (4.1) update in future. However the performance is quite good with ICS. The device is powered by 512MB of RAM and 1GHz processor, not sure but I guess it is Single Core CPU. So far, A18 seems very comfortable with this much of processing power even after loading so many apps from Google Play. I didn’t face any lag or slowdown in the performance, while watching movies or playing games.

Karbonn A18 features 1.3 Megapixel front facing camera which clearly indicates the device is capable of making video calls on your Sim card or using any Android applications as well. I tried calling up my buddies and personally I found the call quality pretty good compared to other 5MP camera based budget phones. Talking about the primary camera, A18 comes with 5 megapixel. I can say that its resolution is similar to other handsets in this range. Though it is very good in day time or daylight but if you are planning to capture pictures or record videos in night or in a room with low light, you cannot expect good quality even though there is a flash light. 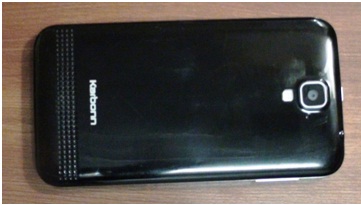 There are various other useful features included with the camera app such as Auto Scene detect, Face Beauty, Smile Shot, etc. You can also change the Scene mode to Sunset, Party, Theater, beach and various others along with several color effects. Karbonn has also provided HDR effect with the camera. Overall you will be happy with the provided cameras in day time.

However there is total 2.5 GB Internal Storage provided, 500MB is used for apps and OS; you can use the rest 2GB as storage mode in your computer but it is not accessible while downloading anything from web on your smartphone. If you don’t have external SD card inserted, you will get error asking for External SD card while downloading. You can use upto 32GB of external MicroSD card with Karbonn A18.

As per connectivity, A18 is very good. It has all connectivity options which can be found in all other smartphones in this price range. It provides WiFi 802.11 a/b/g/h, 3G connectivity upto 7.2Mbps, 2G (EDGE / GPRS) and GPS Navigation. It also comes with Bluetooth v4.0 for faster file transfer. You can also share your internet connection with the built in tethering support.

Screen is definitely quite impressive for watching movies, videos or playing games. Its built-in video player is capable of playing various Audio and Video formats but if you come across any such format which is not playable, you can download third party media players such as MXplayer or Vlc. It was really fun to watch HD Movies on A18. At the same time you will also enjoy playing high end Android games. 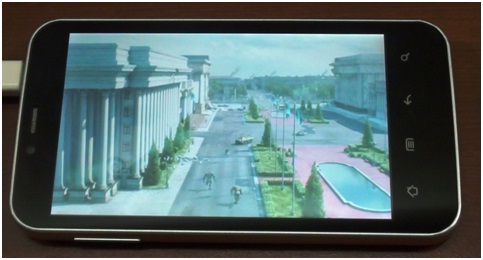 Karbonn A18 is powered by 1500mAh Li-ion battery which cannot be said too powerful but good enough. I get upto 4 to 5 hours of battery life while my phone remains connected on WiFi, while chatting, listening to songs, etc. So you can expect upto 7 to 8 hours of battery life on 2G and music only.

Karbonn A18 is one of the best phones available in the price range of Rs 9K to 10K and with a very good screen. It is very good in performance, looks good and supports almost all applications available on Google Play. Camera quality is good however it may depress you in low light but doing video calls is really a fun with this handset. With 1GHz Processor, 512MB RAM and 4.3-inch IPS touchscreen Karbonn A18 is a great deal.