Lava’s IRIS series of Smartphone have been one of the best mobile phones with Android Operating System in the market these days. Today we are going to review ‘Lava Iris 501’. The phone is having 5inch Multi-touch display, running with Android ICS and 1GHz dual core processor. Lava Iris 501 is priced at Rs. 9,999/- which is quite similar to other 5inch budget phablets such as Micromax Canvas or Zync Cloud Z5. We will compare all these three devices with each other and see which one is better. As of now, let’s take a look at the detailed review of Lava Iris 501.

Design of Iris 501 is quite stylish with black and white plastic finishing. We cannot say it is very comfortable in grip because of plastic body which can be slippery sometime. Apart from this, the design is very good. There are large 5-inch touchscreen with 3 capacitive buttons including Settings, Home and Back key. Above the screen they have placed ear-piece speaker and 0.3 Megapixel cameras for making video calls. On the right side of the phone they have placed Power key which can be also used for Lock On/Off. Volume Up and down key is provided on the left side. 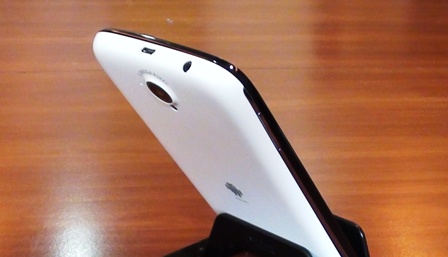 On the top of the phone Iris 501 contains a 3.5 MM Headphone jack next to Micro USB port which is also a charging port. There is nothing on the bottom side of the phone. On the rear side we find a 5.0 Megapixel camera with Auto Focus, Mic, Loudspeaker and Lava’s logo. Personally the design would have been much better if the front finishing was made in white color, similar like the rear panel. Overall, Iris 501 looks great in design.

It looks like manufacturers are looking to make Smartphone with as large screens as they can make. We have seen more than 100 devices launched with 5-inch displays in last few months. Similarly in Iris 501 we have 5.0 Inch (12.7cm) Multi-touch TFT LCD Capacitive display. It was really a fun to watch HD videos on this screen in 16:9 Aspect Ratios. Screen provides resolution of 480 x 800 pixels. Obviously gaming also was a fun on this large display.

About touch sensitivity I cannot say it is very good but it is average. Touch works fine most of the times but sometimes I need to tap 2 to 3 times to launch any application. 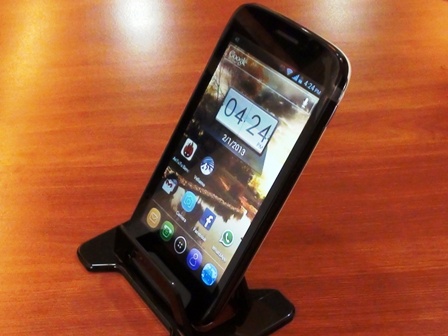 Lava Iris 501 is running with Android ICS 4.0.4 operating system. However there are no words whether it can be upgraded to Jelly Bean, it would have been great with Jelly Bean OS. Anyways, the hardware provided in Iris optimizes Android and offers full performance to par. Iris 501 is powered by 1GHz fast Dual Core processor and 512MB of RAM. As per GPU, Lava has not mentioned anything in their official specification but the test results for video games was quite good. We also tested built-in high end games like ‘Asphalt 6’ (with some more games), the gameplay was truly amazing. So, I can surely say Iris 501 is a very good phone for gaming as well.

We have also run few Benchmarking tests on it and the results were pretty good as compared to other 5-Inch budget Smartphone in this price range. You can see the scores below.

Iris 501 is a very good Smartphone for Multimedia purpose with 5 inch display and powerful 1GHz Dual Core CPU. We have tested few 1080p Full HD videos and didn’t face any lag or freeze during the playback. The speaker provided on the back gives enough sound while watching movies or listening to songs. So if you are at home you will not require headphones to listen the audio. Built-in speaker is enough for the same. 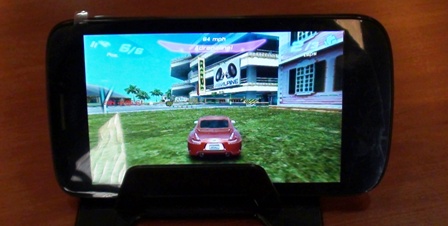 Iris 501 comes with 5.0 megapixel rear camera with Auto Flash. Camera quality is very good. We compared it with Micromax Canvas 2 camera which is of 8 Megapixel. We clicked few images of the same object in the same lights environment and after comparing both images we found that the quality we get with Iris (5MP) is far better than that of Canvas 2 (8MP).

Iris 501 5MP camera provides you Picture resolution upto 2560 x 1920 pixel. Yes, it is HD quality. But there are few restrictions. You will get better image quality only in better light environment. You cannot expect good images at night with low lights. The same issue is also with the front 0.3 Megapixel cameras. 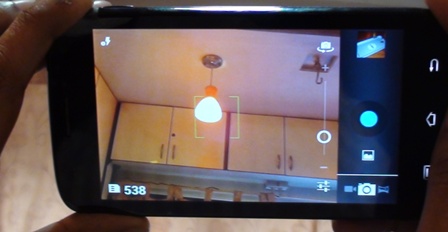 Unlike Micromax devices that come with few of its own applications like MStore, Mzone or Hookup, Lava has not provided any such application for Iris 501. But they have provided some third party applications such as Hike, Messenger, Fusion Music Player, Saavn, etc. Apart from this, they have also given some good built-in paid games for free such as Asphalt 6. There are many more games which you can get with Iris such as Cricket fever, Little Big City, Saving Private Sheep, and Shark Dash. Ofcourse we can get many apps and games from Google Play Market.

Iris 501 is also good in connectivity options with 3G, high speed Wi-Fi, Bluetooth 2.0 and GPS. There is also a Micro USB Port which can be used to transfer files from your computers or laptops. As per storage, Iris 501 comes with built-in 2GB Storage. Though it is very less but we cannot expect more than this as per the price. There are several devices which come with the equal size. However, we can expand the storage upto 32GB using MicroSD Card.

The best thing I loved about this device is its large 5-inch display and customized ICS operating system. The display provides nice output for gaming and multimedia purpose. Also the configuration supports high end games as well as full HD 1080p videos without any lag or freeze. However the touchscreen was slow in response sometimes. Another best part of Iris 501 is its battery. I once charged it fully and kept the phone connected on WiFi with applications running such as whatsapp, facebook, etc. Also watched few videos and played games for about 10 minutes. Still the battery was about 10% left after 25 hours.

So I can say if you are a gaming addict and watch lots of videos, Lava Iris can provide you minimum battery backup upto 10 hours. The battery life of this device is much better compared to other devices. The price of this device is Rs.10,000 which makes it one of the best Smartphone (or Phablet) in the budget range.