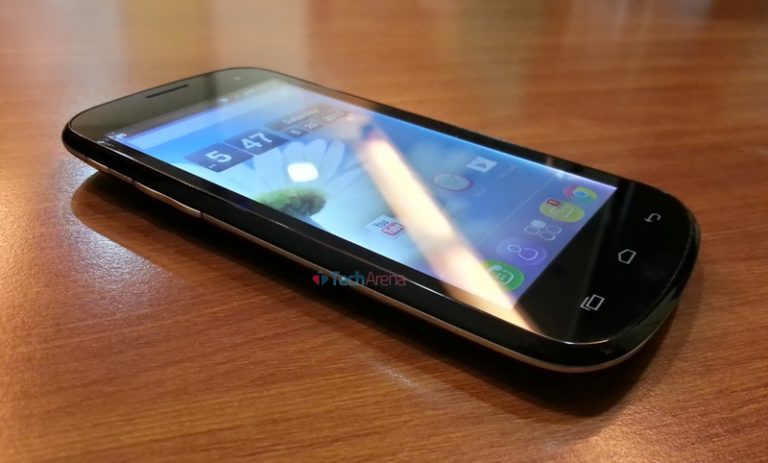 Lava has provided us many good and budget smartphones under their ‘IRIS’ series of Smartphone such as Iris 501, Iris 454, Iris 502 and now Iris 455. All smartphones proved to be worthy in terms of performance and budget. Today let’s find out if Iris 455 is worth to buy or not. The new Iris 455 is Android 4.1 Jelly Bean based smartphone with 4.5 inch capacitive display, 1GHz dual core processor, 512MB of RAM, and much more. The price set for this device is Rs. 7.700/- which is quiet under the budget with Jelly Bean operating system. If you remember, Lava Iris 501 with 5inch display and 1GHz Dual Core processor was launched at the price of Rs. 9,999/- but now it is also available exactly at the same price, i.e. Rs. 7,700/-. So it is definitely a strong competition between lava’s two smartphones itself. We also have a comparison video of Iris 455 and 501. You can check here Lava Iris 501 vs Iris 455 to find out if it is worth to buy a 4.5 inch display phone or a 5 inch Phablet.  Anyways, let’s check out all the features and specifications of Lava Iris 455 individually.

In terms of looks Iris 455 is very attractive and smart. The back panel is made up of plastic material but it appears like Metallic material. Being sleek in design the package offers good grip, it is not at all slippery. There is a metal strip surrounded around the body between the rear and front panel. On the front side the device features a 4.5 inch touchscreen with 3 capacitive buttons including Settings, Home and Back key as usual which we have seen in all other Iris smartphones. Ear-piece speaker and 0.3 Megapixel camera for making video calls is placed on the top of the display.

In order to provide a comfortable navigation with just one hand, all required keys are placed at the left side including Volume Up/Down and the Power key. It can be also used as Lock On/Off. There is nothing on the right side of the phone while at bottom there is just a call MIC. 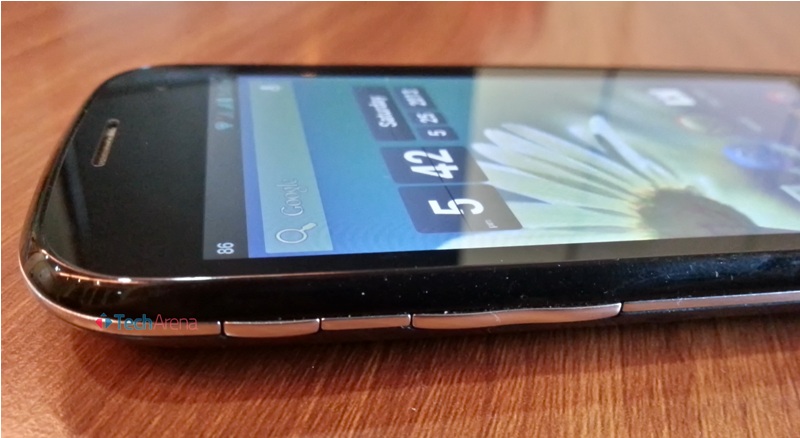 At the top of the phone we get a 3.5 MM Headphone jack as well as a Micro USB port which is also used as the charging port. On the rear panel we find a 5.0 Megapixel camera with Auto Focus, Lava logo at center and Loudspeaker at the bottom. Personally I like the phone design and its 9.92 mm size weighing just 120 grams. The phone looks very smart while holding in our hands or kept on your desk. 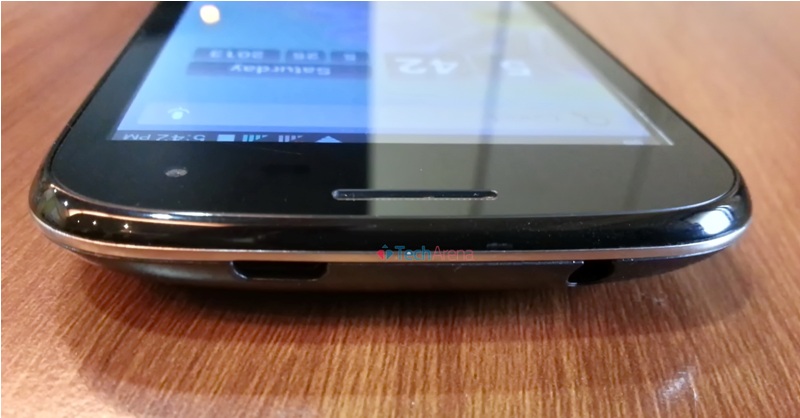 Seems like the same display is used which we have seen with Iris 501 in Iris 455 as well. It offers the same performance and touch sensitivity. It is a decent 4.5 inch qHD capacitive touch screen offering 540 x 960 pixel resolutions. The display provides great output and fun while watching Movies, Images or playing games on this display in 16:9 Aspect Ratio. As I said the touch sensitivity is same like Iris 501, sometimes you may need to tap twice to get the response. Not very great touch sensitivity but a decent one. It produces good color output with better brightness. No matter in sunlight or indoor, you can see everything clearly on the screen on medium brightness as well.

Lava Iris 455 comes with preloaded Android 4.1 Jelly Bean operating system. As of now there is no announcement made by the Manufacturer whether it will get any further update or not, however according to the hardware and configuration, I guess it may run Android 4.2 also without any problems. The device is powered with 1GHz fast Dual Core processor and 512MB of RAM. As per GPU, Lava has not mentioned anything but I guess they haven’t provided any GPU in Iris 455 as in the test we found some problems in Gaming. We will talk about this later in this review.

With 1GHz Dual Core processor and Jelly Bean the device is very good in performance. We didn’t face any Lag or freeze while working with apps, or Browsing or watching Movies. However sometimes the apps response is very slow. This could have been fixed if they might have atleast provided 1GB of RAM. We have also run few Benchmarking tests using ATutu and Quadrant and found pretty good scores. Not better but similar to many other smartphones with similar screen size and configuration. You can see the scores below.

We found Iris 455 very good for Multimedia purpose with 4.5 inch bright display and powerful 1GHz Dual Core CPU and 512MB of RAM. We have tested few 1080p Full HD videos and found very good output. We didn’t face any lag or freezing issues during the playback. Surely the Audio in the Headphone is very clear and loud and also the speaker provided on the back gives good enough sound while watching movies or listening to songs. You can watch videos or listen to music clearly in a group without headphones.

Iris 455 comes with 5 Megapixel rear camera as well as 0.3 Megapixel Front Camera. Rear Camera lets you capture image in 2560 x 1920 resolution. Camera quality is very good in outdoor shooting but you may face some problems while capturing indoor. However the Auto Focus and HDR Mode help you to make the indoor shooting fine to some extent. You can see few examples of Outdoor as well as indoor captured images below. There are also some image enhancement features provided such as Continuous Shot, Self Timer, Saturation, Hue, Anti Flicker, etc. With Continuous Shot you can capture upto 99 images. In Scene Modes we get Night, unset, Party, Theatre, beach, Snow and several other modes.  You also get more options under White Balance settings, Flash On/Off, Face Detection, Panorama Shot and HDR. If you have little knowledge about Camera enhancement, you can make your images much more better right at the time of clicking. Iris 455 also allows you to share your images on several platforms right after clicking an image. It can be shared on Facebook, Twitter, WhatsApp, Gmail, Google Plus, Bluetooth, Picasa, Nimbuzz, WeChat and many more.

As per Gaming, it is really disappointing. You can play only standard games like Manuganu, Shark Dash, etc. It won’t support high end games like Asphalt 6, Gangster Rio, etc; which we were able to play in Lava Iris 501 without any problems.

Iris 455 is compatible with millions of apps available on Google Play. The dual core processor and Jelly Bean help you to run several heavy apps as well. As far as Built-in Apps are concerned, we get very few such as Chrome browser, Fusion, Saavn, Hike, etc. Obviously it also comes with social Networking apps and like Facebook, Google Plus and Twitter. You also get all standard Google apps built-in including Gtalk, G+, Google Search bar, YouTube, etc.

As far as Games are concerned, we only get few standard games like Saving Private Sheep, Shark Dash, CricketFever and Air Control. As we told earlier, the device is not compatible to play high end games like Iris 501, which comes with built-in Paid game like Asphalt 6. We don’t have any such game in Iris 455. Apart from this, similar to Micromax, Lava has also provided its own app called as Lava Zone. I didn’t find it much useful. It only provides you access to Videos, Wallpapers, Music and Ringtones and neither Apps nor Games.

As per connectivity Iris 455 supports 2G and 3G data connectivity along with WiFi, Bluetooth, and GPS. As we know it also comes with Micro USB port for file transfer using USB Cable. Talking about storage, it comes with 4GB built-in storage capacity but only 2GB is available for users. Rest 2 GB goes to the system. We cannot blame the device for such low built-in storage keeping the price in mind. Of course 2 GB is very less for data storage but you also get an expandable memory slot where you can use SD Card upto 32GB.

You will love Lava Iris 455 Smartphone at the price of Rs. 7,700/- but if you compare it with other smartphones in the same range, then you may get disappointed. For example, let’s take the company’s own Iris 501. You get larger display, better image quality, and of course capability of playing High End games which is not possible with Iris 455. However these both devices are available at exactly the same price.

But if you want a phone with stylish look, better grip and running with Jelly Bean, then as of now Iris 455 is one of the best choices. You will surely love watching Full HD Videos/Movies, listening music, web browsing and social networking on this phone. Also the battery life is good which gives you upto 6 to 8  hours in usage mode with 1500 mAh battery.

So if you are looking for a budget Android device which can fit in your pocket easily, then I will suggest you Iris 455. It is one of the best smartphone available today in the price range of below Rs. 8,000/-