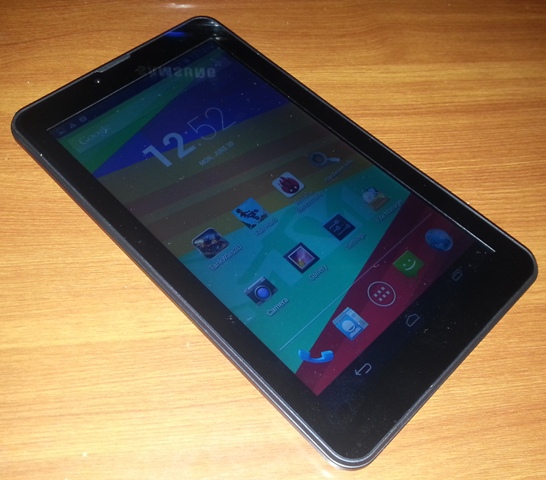 Swipe MTV Slash 4X is the latest device by Swipe under a 7inch tablet product line. This tablet features a hd display and portable design. It comes with a quad-core processor and 1GB of ram. MTV Slash 4X comes with preloaded MTV India app. Like MTV Funny. It delivers you the latest meme, funny pictures, etc; worth sharing with your friends. Swipe MTV Slash 4X comes for Rs.10,000 officially marked on the box, but online you can find the same for Rs.7800 (Amazon). It is a good budget tablet. 7inch screen offers you a IPS display. The screen produces nice quality of image and video output. While the Quad core cpu and 1GB of ram is enough to handle different apps. For gaming it is an average model. That is because of Mali 400 GPU. You can enjoy entry level and mid range games on this tablet. But when it comes to HD gaming the tablet lacks the output. It is portable to hold. It has a thick design that also makes it heavy to carry. Adding a book cover can be beneficial so that you can place it more properly inside the back. Swipe MTV Slash 4X has a good build material. It looks strong, but there are no durable features. You can use it in portrait mode to read news, checkout new sites, for social networking, etc. It is comfortable to use with one hand.  It comes with Android 4.2.2 Jellybean operating system. If possible, Kitkat update can make things better. But there is no news about the same. If the tablet was actually sold for Rs.10,000 then it is a costly choice. But as the official price is different compared to what is in the market, then this is a good product to go for.

Swipe MTV Slash 4X Android Tablet has a sturdy design. It has nice back cover but it is thick and heavy to carry. It is best to use in portrait mode. The screen size is not very small not very large. Enough to read any news or text on the same. Screen quality is good. You can read text, you can play games and watch videos on the same. Being a budget tablet it is not fair to expect much from it. It is already offering a good hardware which is enough for day to day usage.

At the front lies a 7inch display with touch buttons at the bottom. The tablet runs on Stock Android rom which limits the usage. It is not having an optimized OS. Stock rom brings out default apps, but you can tweak the output by adding a few good apps from Google Play.  Touch support is nice. It works well and does not lag. A 0.3MP camera is on the top side. 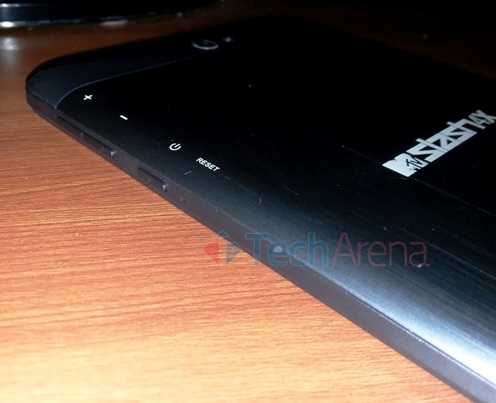 The power button and volume key is placed at the same side. It is on the top right if you hold the tablet in portrait mode. A 3.5mm audio jack and micro usb port is on the top side.

Speaker is placed at the backside. The placement is not proper. Entire voice gets locked when you place the tablet on a desk. The speaker volume is already low and the placement makes it more lower. That is one of the biggest drawback of Swipe MTV Slash 4X Android Tablet. A 2MP camera is placed on the backside with flash. The camera output is not so amazing. The entire body is locked and looks like build with sturdy material. Overall Swipe MTV Slash 4X Android Tablet is impressive. It has a good design and it looks nice while using. You can use various applications on it. It works well due to combination of good hardware. It has a quad core processor and 1GB ram that offers smooth output. 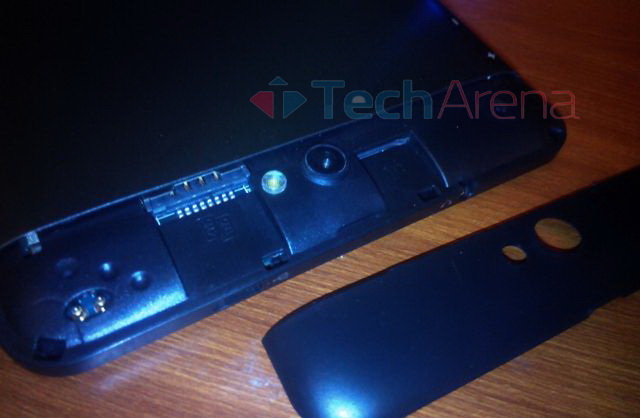 The sim and SD card slot is placed at the backside covered with a small panel.

Swipe MTV Slash 4X Android Tablet runs on Android 4.2.2 Jellybean operating system. Most of the things are based on stock rom. The default apps gives you minimal benefits. You can enhance the same by using various third party apps from the market. It is essential that you must use only required stuff. Do not just overload it with too many things. You will have to buy a separate SD card for getting more storage. Because the default 4GB is not enough. As per the hardware the tablet can run kitkat also. We can expect some updates in future. 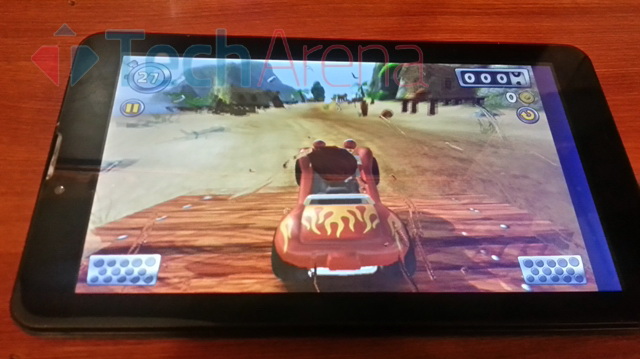 For gaming you can go with entry level output. That means playing games like Angry Birds or Subway Surfer works well. But the tablet lags on hd gaming. Still we have a bit benefit due to 1GB ram that makes the output well. Almost all entry level games works smoothly. For multimedia the default video and audio app plays ample of file formats. To extend the usage more you can simply go with MX Player. For multimedia the tablet is good enough for watching movies. The screen gives a good amount of resolution and the system does not lag or freeze. But for gaming things are bit limited. The tablet is good for multimedia files.

Swipe MTV Slash 4x comes with dual camera support. It has a 0.3MP camera on the front side and 2.0mp camera on the backside. The camera quality is not so impressive. Even after having a flash at the backside the camera output is not so great. Images are fine when you are taking images in broad daylight. While indoors the quality is very dark. Swipe MTV Slash 4X is not really meant for photography. Basic camera output is not just enough here. The default camera app brings up minimum features for taking photos. I tried using different apps on the same that did not helped much. 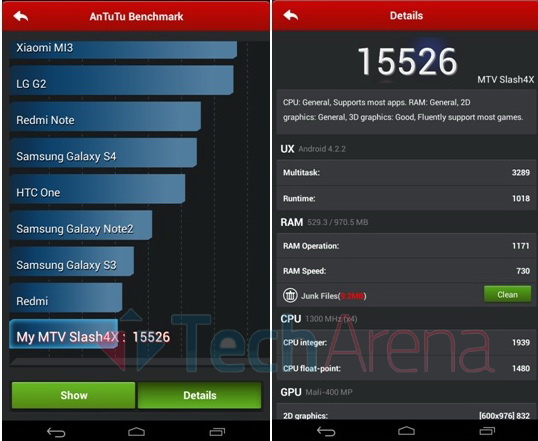 Swipe MTV Slash 4X is powered by a 1.3Ghz Quad Core processor and 1GB ram. It is further supported by Mali 400 GPU. Overall hardware belongs to a mid range tablet. It is not fair to say it as an entry level device. Here you can have fun by adding games like Angry Birds, Subway Surfer, etc. They work well. And apps output is fine while using multiple applications at the same time. But HD games have a bit issue due to a low end graphic processor. Overall performance is good in terms of a mid range device. It is good if you don't load the tablet with too many apps that can slow it down. Above you can see Antutu Benchmark score that is not very impressive. If you need a budget tablet then this one is a good choice and I had already mentioned the cost is bit high compared to a few 7inch tablets in the market. But the market price can be different. The good part of Swipe MTV Slash 4X is its portable size. You can carry it comfortably with you. It has sim support through which you can make calls and use internet on 3G.

The tablet runs on 3000mAH battery. The overall battery output is impressive. You get around 7 to 8 hrs of battery on optimized usage. That means if you are carrying tablet with you and using it only to check mails, to chat with your friends or simply to surf the web. This gives you enough battery output for the entire day. If we count multimedia usage with the same then the battery output is more reduced. And if you are using it for gaming and multimedia both for continuous period then you have to charge it instantly after the first 4 hours. It is good if you can use some battery booster applications on the same. That can save the power by reducing app usage.

Swipe MTV Slash 4X comes with latest hardware support and Jellybean OS. Battery output is also fine if you are not pushing it much. The tablet is officially sold for Rs.10,000 but there can be price difference in local market. The tablet has a portable and sturdy design. It is thick. It is not so impressive when it comes to camera. But for multi-tasking it has enough power to handle different apps. The screen resolution is also fine to surf web, to read eBooks, and to watch movies. But it is not really a gaming tablet. After using the same I found this tablet good for day to day usage.