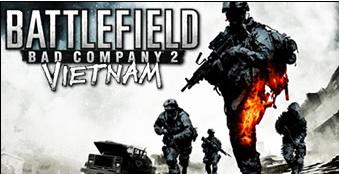 After offering a crowd of players and a not essential but very nice coop mode, the developer DICE finally reviled a big fat content of food to families in fraggeurs fools who struggle persistently ever since last March. Now go to Vietnam mutually to discover a dense jungle (which will soon burn) and innumerable rice fields (where the water will soon be tinged with blood). Battlefield Bad Company 2: Vietnam is a DLC that will cost the gamers around 12.99 Euros on Steam or EA Store. Once the payment is out and the file is downloaded, Vietnam is in the form of a new menu where you can enjoy its contents. So exit the cold battlefield and move away to the modern Western way around the jungle, beaches and napalm.

As I said, the game is around 13 Euros or approximately 1200 Microsoft Points; you can get 5 new maps, weapons of 15 days, 6 vehicles and 2 hours of driving soundtrack. As for game modes, nothing alters, in addition we will expend much time on Rush or Domination. Do not look for new game modes and gameplay totally redesigned for the occasion. Indeed, it is forever the Rush and Conquest modes that exists, still needs the same hunting flags and killing more or less prearranged around pairs of targets to blow up or defend. What we found in Vietnam is generally four new maps on which GIS and North Vietnamese troops will be put on the face with weapons. Thus welcome as it should be the strategic base, Hill 137, the Temple of Cao Son and the Valley of Phu Bai. Also remember that a fifth card (“Operation Hastings”, already known to fans of the series officiating PC) will come into view when the community will reach 69 million to make collective action on field.

Now, it is time point to recognize whether the enjoyment is to go and if the purchase is worth it. As suggested above, the quality of the title, the most obvious, is visual. Every single card has the indisputable expertise of the designers at DICE and, especially, has a superb variety in terms of atmosphere. 137 Hill offer such glowing landscapes and scorched earth-scented Apocalypse. Cao Son Temple based in the old ruins and dense vegetation, so we nearly expect to cross Indiana Jones Nathan Drake or the turning of a gunfight. The vegetation there is generally denser, rockier terrain and hideouts much more dangerous. You should note that we will not escape so far to some large fields where death can chase us without any tank support; however tank will inevitably lead to a quick death.

Actually in the original game, motor vehicle seems a little less important than the cards, with the exception of the Huey helicopter (UH-1), thus leaving more room for the infantry. The latter will have plenty of opportunity to utilize the gear at its disposal, a gear that for once, well mark a return to 40 years in the past. Say goodbye to high-tech sights! Only snipers can take their seat for a gun. Even with all weapons unlocked from the base game, so you’ll feel a bit like back to zero, with pop-guns effective, but more problematic that it will respect the true nature more. In Vietnam, it is actually more difficult to rub out an enemy soldier stationed 200 meters away with a machine gun medic. However, you may be grateful for the fact that all classes of fighters, which were broadly rebalanced for the occasion, will have access to flamethrowers terrifying, formidable in the context of course. Phu Bai Valley: its rice fields and flat terrain are a paradise for large-scale fighting, whereas Vantage Point offers a relief chaotic and alternates hilly and charming villages.

As Mentioned above about terrain’s craggy nature, be aware that Vietnam still favors serious fighting at close range, between grunts hiding in the trenches, shell holes or behind fallen trees and wobbly at the thought of running short of 10 meters. Being familiar with how to handle the grenade is more essential to evolve in these new battlegrounds. On 3 maps available, DICE has also worked to channel the gamers to two or three bottlenecks. This viewpoint leads to the facto combating that show more violent than in the history. Stuck behind a portion of rock with members of our squad, we play to keep the elbows tucked away until the grenades shower are reduced, each escape attempt that often end with a bullet in the chamber, housed by a man hidden 20 meters away behind the smoke, bamboos and ferns. You have to be logical, consistent, and relentless; however, this perspective may be frustrating for players who do not feel too stifled on the ground.

You will even find some symphonic cults in this DLC. In fact, flying a Huey helicopter while listening to the Ride of the Valkyries at the time your comrades are fighting for their survival down below, remains a great time. The flamethrower is definite to be the star throughout the combat in narrow zones and the battery of weapons of epochs appears tremendously well modeled. Also the game offers war of position very often, particularly in Extreme mode, where there is no room for error. In brief, the Vietnam DLC opens the door to a way of playing very dissimilar from that to which we had used before, even if it does not have an effect on the basic gameplay of Bad Company 2. In a sense, this is an important achievement that is likely, however, surprise a bunch of Gamers. First of all, ask a question to yourself, before succumbing, that whether you are really ready to enter the parts where you die often, without knowing why…

The last case is particularly based in Hill 137, whose unexpected atmosphere will unquestionably figure in the Bad Company 2 best top 3 maps. It will be respected by many against the sepia filter that DICE had fun adding to the old image. This has the effect that actually tarnishes colors, in order to show the game more impressive and above all to make identification of enemy soldiers more difficult. But essentially, the only genuine fault of this DLC is that even if not very cheap, renovate still very pleasingly. As a final point, note that Vietnam is also unusual in many core soft in appearance. Besides the skins of the combatants (pack of smokes screwed to the GI helmet, conical hat for Vietcong), these new maps are a rather significant change of scenery.

Look no further, Battlefield Bad Company 2: Vietnam is one of the best deals of this season. The new maps are excellent and the atmosphere is perfectly restored. In line with the Battlefield Vietnam in 2004, this extension for Bad Company 2 propels us intensely on the battlefields of Southeast Asia. Devoid of really touching the base of its big baby khaki , DICE however handled to discover the right balance between gameplay run-oriented, violent clashes ultra short range and atmosphere of the 70s. Thus VietnamDLC seems to be very inspirational and made to allow fans to those that are not scared to spend hours over hours for this repeatedly death and madness. For once, a DLC is definitely worth its price, one can clap.