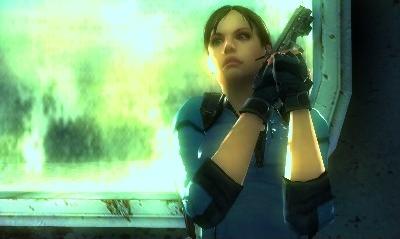 During the occasion of the Nintendo World celebration, Capcom guys did not want to be less and they present a playable demo of Resident Evil Revelations. The saga has gone through many phases from birth to PS One, dissimilarity in gameplay, graphics, ambience and even complete change of gender. There is no doubt that Resident Evil has been a great series that has made the survival horror genre and provided some very good titles for years.

In conjunction with Resident Evil 3D , Mercenaries are of two chapters to be published in 3DS, although as explained its director, Mercenaries will be more intended for action, something more akin to the 4th or 5th delivery of the series. But Revelations wants to look reverse in the early chapters of its saga, providing more cruel environments and a well-built character horror game, limited ammo and a larger number of scares. In addition, the main characters are Chris Redfield and Jill Valentine who were protagonists of the first episode.

For gamers who are not much aware of this series, the game is set in 2005 and would fit between the fourth and fifth episodes events. Jill Valentine and Chris Redfield have formed a group called the fight against bioterrorism with short form known as BSSA (Bioterrorism Security Assessment Association). Although there are not many details about the game’s story, but as per the game’s trailer, the two protagonists have a heated chat with an unknown character tied to a chair. The identity of the character is still unidentified but bears some resemblance to Jack Krauser, Leon S. military partner Kennedy made his appearance in Resident Evil 4. Also, the introduction does not provide much effigy of his face to show his big scar, but so far nothing is confirmed about his identity. The chat occurs in what appears to be a cruise ship and which is planned as one of the main scenarios which will take place this new episode.

The first thing to add is that in spite of its makers proposed to provide more better touch to the survival than its previous chapters, but the camera mode is still similar like previous ones. Camera will be located on the right shoulder and will have your weapon ready at any time. We can guess that controls are bit distinct and we use only 3 buttons on the console while playing.

First button is B with which you can make character run and carry out actions like inspecting, opening doors, lockers etc. Second is L button that makes you point to your weapon, to offer us first person mode. During the development of the console, some voices indicated that the lack of a second analog button control difficult in some games like first person shooters, but Resident Evil has returned to offer that is so characteristic control, and criticized by some, point and shoot still impossible to move and shoot at the same time. As for the gameplay, we can assume that the remaining buttons can perform the usual functions of inventory, map or use the knife.

If we talk about the atmosphere, it is clearly marked its return to the purest survival horror with dim lighting, eerie sounds and spaces. Particularly certain areas show totally dark just with a slight lighting of our flashlight, while we hear sounds of a ship in decline and creatures from beyond the grave. The 3D effect is well-managed in some elements, the railings of the stairs, some items such as lockers scattered on the floor, opening doors or vision of the character in the first instance by the type of camera used provide a good deep feeling. In addition, there are some classics bats added that appear when you expect least by breaking a glass, causing shock and leveraging technology for visual of the console.

There is also some closer resemblance to creatures of Silent Hill or infected zombie classic, having an anthropomorphic appearance but with a bizarre design. However, as in the trailers offered are some zombies and Umbrella soldiers, so we take for granted that they too have their appearance. The only fault that appeared in trailer is through a crystal can be seen as one of these creatures kill a human and spraying the glass with his blood (again well 3D effect .) As we move toward this room we will find that feed on their flesh kneeling on the floor and when we have to give medicine as a good base of ammunition, we realize we cannot wise for the hollow under a table.

That is, for the space we see in his body, but pointed out there the bullet disappears in a black hole. Decided to go and massacre them in the back and then saw the error. We could not hit the creatures until the animation sequence for leaving and joining the body was over. We hope that this bug is fixed, but every event in which the creatures have to make the corresponding animations, will be invulnerable to our shots which means loss of ammunition and continuing doubts about whether to shoot me or wait a little longer.

In matters graphics the game looks good. Using the same engine as Resident Evil 5 have managed to create some designs for characters and creatures very well made, despite the pixelated profiles that also make their appearance. The 3D effect although not as spectacular as the Metal Gear looks correct, calmer in general but without forgetting its potential.

Generally, Resident Evil Revelations aims in many ways. A return to pure terror would seem that the developers are working well with most claustrophobic settings and sounds darker atmosphere this time. In addition the game will feature a cooperative mode (using the connectivity of the console) that will allow us to play with a friend, we assume that choosing each of the two protagonists as it was in Resident Evil 5. While there are some faults that should be corrected, we are waiting to show us more.