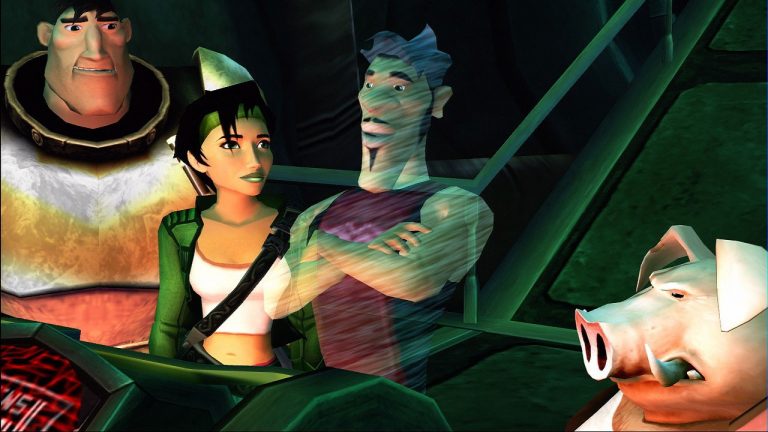 Although sales were not perhaps to be expected but Beyond Good & Evil was backed by the creative stamp of Michel Ancel, who is well known for games like Rayman and Tonic Trouble. But unhappily, far-off from disappearing from the landscape as other games, the inspiring Michel Ancel has instead been subject to strong word. The fans are obviously determined to see their favorite title is not forgotten. In addition, Ubisoft finally determined to offer a second chance to BGE. With no facelift in graphics and without any change in gameplay, the sequence is now backing on PS3 and Xbox 360, all at a reasonable price. What remains now is a pray that this title finally meet the achievement it deserves.

Now apart from the logic, very first question is to consider whether they have really been old enough to bring back a game with the excuse of high definition, something that Ubisoft has released the head with franchises such as Prince of Persia or Splinter Cell. Undoubtedly, the idea is to capitalize these titles, then give them a trade, and promote its availability, in this case, thanks to digital distribution. It is also something that makes some sense: the backward compatibility between consoles has not always been with us, but the public already assumes you … even if PS3 and Xbox 360 have lost this function.

Released in 2003 on PS2 and PC, Beyond Good & Evil is the result about thirty people’s work that gathered for a little training in Ubisoft Montpellier studio. Its head was Michel Ancel, whose goal was to build a world where you can feel free to go on an adventure, to wander and take pictures. Stimulated by the world of animated film director Hayao Miyazaki as well as Shigeru Miyamoto (Mario, Zelda), he intended an attractive story and invites us to experience the struggle of a young woman Jade whose goal is to defend its planet from alien invasion. Blending adventure, exploration phases in vehicle combat and infiltration into a colorful and bathed in lavish musical compositions, the game is renowned by a poetic approach and quite adult.

The main virtue of this title was that it remained exceptional and fresh style, along with incredible adventure with good doses of action. The transition to HD has been reasonably careful. It is supposed that the geometry, poly, characters and environments is not like the current games, but there is more than obvious forward step in its visual aspect that makes it an excellent opportunity to experience it along with its price. But now, it is time to enter the heart of the matter. So let’s start from the beginning, but to focus on the scenario of BGP, the scenario that reading can be done at two levels. Either we perceive history as that of the planet, Hillys facing a war that has raged for several years, where we focus the main character, Jade who lives use to live in the situation of daily basis and trying to do with it. Both views are valid. The title also regularly alternates between two views with a storyline that moves at the global level but never loses an opportunity to focus on jade.

Along with Jade, the leading role is her pig friend, Zerdi. The camera, as noted above, is also essential because Jade is a freelance photographer and is immersed, as she does not like things in a web of plans in which the state itself is involved. These parties of adventure, with touches of stealth and action, add openly war objectives where we fought a lotand also moved through the environment with something rather like a hovercraft, for which we can achieve multiple improvements. This place is in constant war with the Domz, aliens with aggressive goal. The only defense for the inhabitants of Hillys are shields and elite squad called Alpha Sections, who in principle are responsible for ensuring the safety of the people.

The resistance group IRIS believe that the Alpha Sections are hiding something and do not hesitate to say spreading underground newspapers filled with startling revelations. In this unstable political circumstance Jade is a war reporter who caring for an orphanage with her adoptive uncle. Jade use to make photo reports in order to live. So when she offers to capture a creature domz who is hidden in an old mine, she does not doubt that this is the beginning of a long journey that will join the ranks of IRIS that it will lend her photographic talents for missions in the heart of Alpha neighborhoods.

However, Jade is going to be trapped in a conspiracy that is planned by IRIS, a secret organization that wants to prove that the Alpha Sections are not what they seem. In fact, no one is what it seems, and dark intentions defensive forces themselves are terrible. IRIS Jade assigned various missions, which serves as a mechanism for progress in the game with a well defined structure. You should also know that Jade will not be alone in her mission for truth. Accompanied by her Uncle Pey’j since the beginning, she will also inform Double H who is a very deliberate member of IRIS and pledge by the theoretical books and Peter Carlson, his two masters. Jade can build time on her teammate, asking them to press a switch or trigger for a super attack during the combat. In this regard, the phases of combat are not many, Jade prefer to avoid as much as direct confrontation possible, especially when it occurs in enemy territory with many Alpha guards lurking around.

While playing the game, the controls are easy and very flexible. The left stick is to choose the direction and the attack button to hit. The combos are connected in the most beautiful way. Jade is rolling, striking his back, front, side and never stop. It will then find the most suitable technique to make them bite the dust. The grouping of elements is treated very well, so the end result is balanced and is kept fresh by today’s standards, showing how well was the game defined. The photo is key factor to watch the world around us, as to take pictures of the diverse wildlife of this world, send directly to the scientist laboratory who has hired us, and depending on the rarity of the bug, we will be paid. A big part of the game is faithful to photo reports that Jade must perform in Alpha neighborhoods.

Jade must progress with the soldiers and that too undetected. For this, observe their patrols, identify their positions and find the right moment to pass on their backs. These phases are very interesting and enhances the biggest flaw of the game: the cameras. Fortunately, the game is not one to make us start a whole level in case of defeat. Privileging pleasure to frustration, BGP hold a kind of invisible checkpoints. Thus, if one was spotted by a guard, we start instantly at the entrance of the hall without undergoing unwanted loads! It is simply damage that UBS has not sought to correct the single biggest concern coming out of the game in this remake.

There is also another type of currency something like pearls but to get them we’ll have to kill enemies, to win races with our hovercraft and many mini-games. This monetary system is very useful as it will be our only accepted in one of the key points of the adventure to buy many things for Jade, Zerdi or shed. A pleasure also communicated by the realization, even if the graphics facelift touted by the neighboring label to the HD game title is in effect confined to the contouring and works on character models. In order to realize the difference between previous and current title, you really need to put both versions side by side. So do not expect that you BGE HD explodes retinas, because you end up with just a slightly altered, but not revisited.

As I said earlier also, control system responds well, which makes sense when you consider that the configuration of that part and was very good. The PS3 controller does not provide major structural changes in this line as compared to PS2, but Xbox 360 is superior to its forerunner in ergonomics and touch. Hence the result of course accompanies. It also remains to remind the atmosphere, wonderful as usual with such charming musical themes. The instrumentation is able to bring out calm and peaceful feelings sometimes, while sometimes nervous and worrisome. The actress Emma, who has given voice to Jade is surrounded by a cast of talented actors giving life to all characters. Also if we talk about other characters like Pey’j or nomdidju or Double H, everyone has be characterized with well-tempered personality.

With the return of Beyond Good & Evil you can reach a new audience that perhaps you missed in 2003. The game, of course keeps your virtue unbroken with good plot, better gameplay and attractive art section. At the same time we too regret the fact that Ubisoft has not taken the opportunity to correct the sole fault of the game, the camera but still the experience is always outstanding. The technical facelift helps you catch up to the present circumstances, for what-about-15 hour adventure that is definitely not a waste, as when it premiered back in 2003.