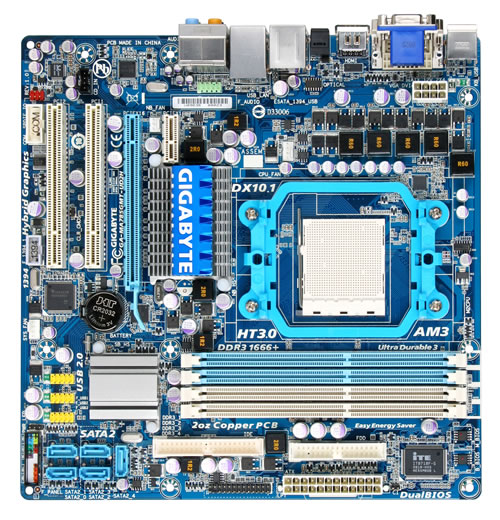 The GA-MA785GMT-UD2H introduces a revolutionary GIGABYTE Ultra Durable 3 technology on AMD platform with featuring two oz copper PCB and further helps to reduce the system temperature and dramatically enhance the performance.This latest version supports DirectX 10.1 and the second version UDVD. According to AMD, the performance in games are superior to those offered with the Intel G45. Note that motherboards based on AMD 785G chipset are the first cards supporting this IGP DirectX 10.1.

The long winded GA-MA785GMT-UD2H also has much the same features as these predecessors, clearly updating only the chipsets (obviously) and the socket and memory slots for AM3 and DDR3 support respectively.With the innovative GIGABYTE Easy Energy Saver technology, GA-MA785GMT-UD2H is able to provide user friendly computing, reach the maximum system performance easily while still able to save the power and environment in real life at the same time. It also offers complete compatibility with future operating system from Microsoft, Windows 7. The motherboard offers a PCB layer copper doubled part of many innovations identified by the Ultra Durable 3 Classic. In fact the cooler has been profiled to provide enough room for you to plug in an expansion card such as a TV tuner or sound card without any problem.

The motherboard is sold in a small box not much bigger than the card itself. In his unpacking, we can immediately recognize the traditional blue PCB manufacturer. By cons since its motherboards based on X58 chipset, Gigabyte has retained more sober colors for various components of the card.

On the side of the processor power we find a power system 4 +1 phases with three Mosfets by choke, a phase for memory and also for the Northbridge. The card also supports processors can consume up to 140W, as the latest AMD Phenom II, the 965BE.The card still has a PCI-Express 2.0 graphics card if you want to use a more powerful graphics solution, which would increase consumption, noise and size of a HTPC. It is also equipped with two PCI and a PCI-Express 1X. The radiator cools the Northbridge can nevertheless greatly hinder it!

It is also found on the MA785GMT-UD2H some older ports as an IDE port, yet sometimes necessary but also a port for floppy disk, a parallel port and one RS232 serial port. We have right cons to five SATA ports, but unfortunately none are positioned at right angles. Using a long graphics card will therefore hinder the integration of S-ATA cables. The rear panel of the MA785GMT-UD2H is very comprehensive as this area has a PS2 keyboard port, six USB 2.0, one Gigabit Ethernet RJ45 port, a Firewire port and an eSATA port. It includes also the analog audio outputs and digital inputs / outputs 7.1 audio handled by the chip Realtek ALC889A. It also reflected the different video outputs, video d-Sub, DVI-D and HDMI 1.3.

The BIOS of Gigabyte MA785GMT-UD2H is very comprehensive and structured like all the Bios manufacturer. It is right to record up to eight user profiles, and stored directly on memory bios or on another device like a hard drive or USB key. Via the bios, you can also overclock the Radeon HD 4200 integrated chipset 785G, at the base clocked at 500MHz. It will be perfectly stable if it doubles its operating frequency. In effect 1Ghz GPU, we encountered no artifact and benchmark performance in 3D could enjoy a substantial gain.Under the Advanced Clock Calibration section is the key to Gigabyte’s awesomeness here: the EC Firmware Selection. For those with triple and dual core CPUs based on the original Agena that has cores hidden, selecting “Hybrid” and Auto under ACC control in this section can potentially unlock them without the need to reboot.

With UVD 2 (Unified Video Decoder) experience in front of the screen is better with vibrant colors, fresh using dynamic contrast acceleration support H.264, MPEG-2 and VC1. With this system in place to remove stress for the same processor can take care of other applications. To form an HTPC platform is essential that feature, otherwise you should choose another economical option dedicated to navigation (the Internet) and document management.

Saving energy is already being implemented in most products due to awareness by enterprises to care for the environment. Therefore proposes the ATi AMD Power Play on all models (whether video, motherboard, processors, etc.) where both AM3 Phenom II as the Radeon HD4200 decrease their frequency of operation (dynamic clock) while not reducing intensive tasks are carried out and energy consumption.

If you want to assemble micor-ATX pc-based AMD, then Gigabyte MA785GMT-UD2H is best for you and at the same time it also has good graphic solution for playing games and also has very low resolution, at the same time it is compatible with HDMI 1.3 and its UVD 2 engine comparable to the latest Radeon HD graphics cards, it can play videos encoded HD H264, VC-1 and MPEG-2 (DXVA) in relieving the CPU utilization. With AM3 CPUs backward compatible to AM2+, you might as well settle for a cheaper 780G board if it still fits the bill, coupled with a 3GHz, 45nm Athlon II X2 250. Of course, that’s not a guaranteed result, but this combination makes for a very good and very cheap overclocking platform that certainly has enough features for not just budget concious users, but the average system builder too – there are plenty of SATA ports, quality audio, and lots of useful ports and sockets.