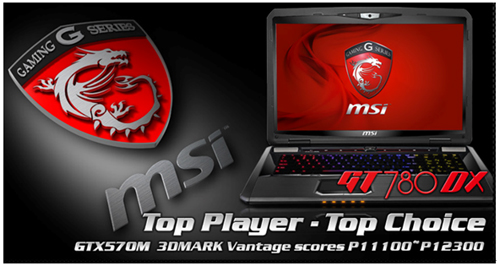 What makes the GT780 series as the gamers’ ultimate weapon? In terms of power, it features the Intel Core i7 quad core CPU and latest Nvidia’s top-end GeForce GTX 570M discrete graphics card with 3 GB of GDDR5 display memory, giving it superior performance, so you can enjoy smooth graphics even when playing the latest games in high resolution. The impressive performance also serves to greatly enhance game realism and make these machines the ultimate weapons for the extreme gamer. The scrappiest gaming laptops on the planet, the GT780 series has racked up countless awards, standing head and shoulders above the competition.

MSI Marketing Director Sam Chern stated，the latest GT780 series not only packs performance to keep the extreme gamer engaged, it also comes with a SteelSeries keyboard specifically designed for serious gaming. The new keyboard is much more rugged and the new design better meets the needs of extreme gamers to give you the edge in the heat of battle.MSI has also incorporated Dynaudio sound technologies for a riveting audio experience.

MSI Marketing Director Sam Chern stated that their superior hardware has made the GT780 series laptops so popular among top players that they are flying off the shelf around the world. The series has also been well received by major technology media outlets and other organizations in countries around the world. In the recent Digital Life Awards 2012, for example, the annual high tech product awards ceremony organized by Singapore’s Straits Times, one of the most influential newspapers in Southeast Asia, the MSI GT780 Series outshone leading brand video gaming NBs from around the planet when the GT780R won Best Gaming Laptop, Editor’s Choice.