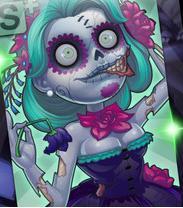 GREE today announces the release of the first game out of their new North American studio – Zombie Jombie. This new iOS-exclusive title is a free-to-play card-based game that invites players to harness the power of the undead using a powerful deck of zombie cards while defending the earth from evil humans hell-bent on destruction. Offering a series of social features including the ability to trade cards and play with or against friends, Zombie Jombie takes an unconventional approach to the zombie genre and brings a new type of gameplay to mobile gaming. In Zombie Jombie, players battle tough human bosses and complete quests in major U.S. cities as a “Jombie” – a powerful being with a unique ability to raise and control zombies. To accomplish these tasks, players build and customize their own distinctive deck of cards by trading with friends, fusing multiple cards together, and opening treasure chests that unlock special content. Because of the variety of ways players can upgrade and power-up their card decks, each Zombie Jombie player will have an exclusive experience. Zombie Jombie will also have on-going content updates offering new game features and aiming to continuously enhance the player experience.

“Zombie Jombie invites gamers into a new and darker world where zombies are the good guys and it is humans you have to watch out for,” says Eiji Araki, SVP of Social Games, GREE International, Inc. “The truly talented team members of the North American studio have really focused on creating an innovative game experience that ties together strong gameplay and great social features, an approach we plan to implement for all of our games moving forward.” GREE’s new North American studio, based in the San Francisco area, is focused on creating the best free-to-play game experiences for mobile and has plans to release more titles in the upcoming months. Additionally, GREE is currently building a social mobile games platform, scheduled for release in Q2 2012. The new GREE platform will feature high-quality content and a robust social gaming experience, inviting users to play games with and against their friends and join and interact with a global mobile gaming community.