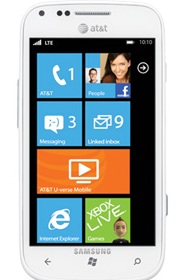 In April, AT&T launched the first 4G LTE Windows Phones in the world with the Focus 2 marking the carrier’s third 4G LTE offering on this operating system. AT&T customers have access to the nation’s largest 4G network, covering over 260 million people. As 4G LTE expands, AT&T customers are able to enjoy a widespread, ultra-fast and consistent 4G experience on their compatible device as they move in and out of LTE areas. AT&T has two 4G networks that work together for customers, LTE and HSPA+ with enhanced backhaul. With other carriers, when you travel outside of their LTE coverage area, you’re on a much slower 3G network.

Beginning May 20, customers can purchase the Focus 2, available in a glossy pure white, from AT&T for $49.99 with a two-year contract.

Like AT&T’s other new 4G LTE Windows Phones, the Samsung Focus 2 features the Windows Phone 7.5 operating system which makes it easier to do everyday tasks faster. Only Windows Phone has Live Tiles, providing real time updates on your Start Screen including calendar appointments, emails or social media feeds. With Bing Search built-in, you’ll never be lost, as finding directions or a highly rated restaurant nearby is quick and easy. Microsoft Office Mobile and SkyDrive also allow you to create, save and access documents anywhere from the cloud to help maintain productivity while on-the-go.

The Samsung Focus 2, the latest addition to the Focus family (following the Focus, Focus Flash and Focus S), comes with a 4-inch Super AMOLED screen and 5-megapixel camera that makes taking pictures or shooting video in HD 720p a breeze. The front-facing VGA camera provides the ability for video chat. Hands-free messaging is available through speech-to-text and text-to-speech features that make it easier to stay in touch safely while out and about.

“Samsung is the unmatched leader in offering smartphones across a variety of platforms and the Focus 2 is a powerful example of our continued commitment to Windows Phone,” said Dale Sohn, president of Samsung Mobile. “As our first 4G LTE Windows Phone, the Focus 2 is a fast and versatile device for productivity, entertainment and social networking.”