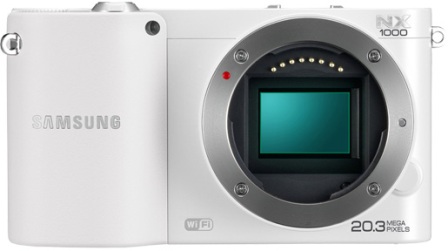 Perfect for budding photographers, the stylish and approachable NX1000 is available at Samsung retailers nationwide

Samsung Electronics America Inc., a market leader and award-winning innovator in consumer electronics, announced that it is now shipping the sleek NX1000, the most budget-friendly of the NX SMART cameras, the first compact system cameras (CSC) with built-in Wi-Fi. Wi-Fi connectivity is available at the touch of a button, thanks to a dedicated Smart Link Hot Key on the top of the NX1000 that makes sharing and storing photos simple and easy.

Available in black, white and pink, the fashion-forward NX1000 offers extreme portability and convenience combined with the power to capture premium photos and videos that are the standard of Samsung’s NX Series. A great introduction into the CSC category, the NX1000 is available now from Samsung retailers, priced at $699.99 MSRP.

The imaging prowess of the NX line combined with the stunning design and portable form-factor make the NX1000 an extremely approachable and highly-capable camera. Gone are the days of sacrificing fashion to achieve great images with a large, clunky camera, as the NX1000 is small and attractive enough to double as an evening accessory. Plus, with its colorful options in white, black or pink, the NX1000 can coordinate with any palette. Bundled with an all-purpose 20-50mm lens and external flash, the NX1000 is a versatile camera that can help aspiring shutterbugs develop their photography skills, while also capturing breathtaking, high-quality images.

“Samsung’s leadership in SMART cameras, coupled with the exceptional image quality and sleek design of the NX1000, makes this a must-have camera for serious photographers and beginners alike,” said Reid Sullivan, Senior Vice President of Mobile Entertainment, Samsung Electronics America. “With the introduction of the NX series, the expansion of Samsung’s full line of SMART cameras is complete, providing instant sharing without compromising image quality. We look forward to inspiring the next-generation of photo enthusiasts with the NX1000.”

The Samsung NX1000 offers a large, bright 3.0-inch LCD screen for composing images, 1080p HD video capture, and technologies like Smart Auto 2.0 to bring out the inner photographer in all users. Boasting a 20.3-megapixel CMOS sensor and fast shutter speeds of up 1/4000 seconds, the camera ensures no moment is missed.

NX1000 Shoots SMART
Coupled with the latest SMART features, the integration of Wi-Fi in the NX1000 enables users to instantly upload images and video to social networking sites like Facebook, Picasa, Photobucket and YouTube, to the cloud with Microsoft Sky Drive, or even email them directly from the camera at the touch of a button.

Beyond Wi-Fi connectivity, the NX1000 also touts compatibility with Samsung’s Remote Viewfinder app, which opens from Google Play onto supported Galaxy smartphones or tablets* and allows users to control settings and even take the picture from up to 30 feet away. With Samsung’s MobileLink app, users can easily transfer and display images from an NX1000 ontoSamsung smartphones, tablets, or Smart TVs – creating instant photo frames.

Samsung’s AllShare technology and the TV Link application offer additional connections directly to a DLNA-compatible TV to showcase the high-quality images on a big screen, while PC Auto Backup automatically stores photos on a PC via Wi-Fi, eliminating the need to untangle mounds of frustrating cables.

Creativity is a Snap
Expression through photography is made a reality for photographers at any level with the NX1000. With the Smart Auto setting, the camera analyzes, identifies and automatically selects the most appropriate scene mode for the best results. Scene detection technology identifies the conditions and automatically adjusts settings to help achieve dynamic images—whether photos are taken at a low-light fashion event or while capturing dazzling fireworks at a 4th of July gathering. For users seeking more control, the Smart Panel feature allows them to explore their own photographic skills with Full Manual Control settings for aperture, shutter speed, flash intensity and more – all from a single, intuitive menu screen.

The NX1000 touts ten exclusive Smart Filters and a new Selective Color function, which allows users to isolate a single color in an image for a dramatic effect. Capturing an expansive scene is also a breeze, thanks to the innovative 3D Panorama feature that creates immersive shots of landscapes and scenery.

For more information on the new NX1000 as well as Samsung’s full line of cameras,please visit www.samsung.com.