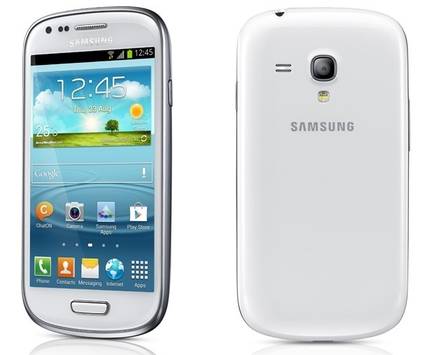 As expected, the Samsung Galaxy S III Mini was formalized yesterday and invited the segment of smartphones 4 “, which is a direct competitor of iPhone 5. Its characteristics and design have leaked a few hours before, the effect surprise found somewhat reduced.

Samsung Galaxy S III Mini is a smartphone incorporating the spirit of the Galaxy S III in appearance and is seen with a Super AMOLED display 4 “800 x 480 pixels and a 1 GHz dual-core processor combined with 1GB RAM and 8 to 16GB of internal storage, expandable via microSD card.

On the back, it features a 5 megapixel camera capable of recording 720p video, while a VGA camera on the front allow videoconferencing. The smartphone supports WiFi and Bluetooth 4.0 and has a GPS / Glonass and a chip NFC (Near Field Communications) for contactless services.

It uses Android 4.1 Jelly Bean with TouchWiz touchscreen overlay and uses the advanced software announced the Galaxy S III, as the S Voice speech recognition or retrieval of data from various sensors on the device to automatically adjust its operation according to the use made of it.

Finally, S Beam allow instant sharing of files between smartphones Galaxy S III or S III Mini without using the cellular network or WiFi. Samsung Galaxy S III Mini therefore retains some characteristics of S III in a lightweight configuration that does not exactly positioned on top of the range can be as big brother or iPhone 5 but it keeps a lower price 600$.