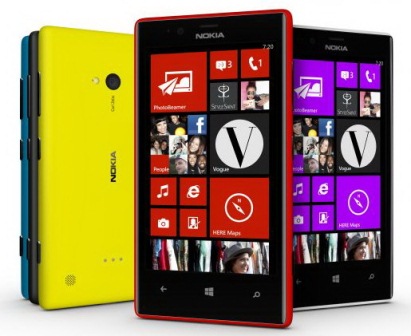 Nokia, today, unveiled two new additions to its Lumia series, augmenting its range of WP8 devices in India across price points. With the launch of the two new devices-Nokia Lumia 520 and Nokia Lumia 720-Nokia will bring a range of innovative, unique and high end experiences to a whole new set of audiences across the country. Blending exceptional style and innovation, Nokia Lumia 720 offers a powerful camera, multitude of navigation options and an integrated entertainment and social experience of Windows Phone 8. Nokia Lumia 520 is an highly immersive and affordable smartphone that provides rich selection of innovations for a more fun and exciting smartphone experience.

Launching the new devices, Mr. Vipul Mehrotra, Director-Smart Devices, India Middle East Africa, Nokia said, “The WP8 momentum is building and Nokia is charging ahead with the Lumia series. The launch of Nokia Lumia 720 and Nokia Lumia 520 reflects our commitment to build a winning ecosystem that will enrich people’smobile experience and help them connect with each other at newer price points. The two new smart devices will further invigorate brand Nokia with amongst the new generation of smartphone purchasers.”

With a focus on younger and connected audience, thetwo devices are not only high on innovation but come with a stunning and eye catching design that are sure to make heads turn. Nokia Lumia 720 and Nokia Lumia 520 are based on the core components of design-inspiration, colour, craft, simplicity and material – that bring together gorgeous design and great functionality to reveal devices that are truly spectacular.

The phones were unveiled by Nikki Barton,VP, Smart Devices, UX Design, Nokia and Masaba Gupta, theyoung and renowned fashion designer, who emphasized the role of design in conceptualizing an innovation.

Presenting the unique features of Nokia’s latest devices, Nikki Barton, VP Smart Devices, UX Design, Nokia said “For the third generation of the Lumia range we wanted to combine something super slim and striking but still with great functionality. The Nokia Lumia 720 and Lumia 520 redefine the concept of human design where innovation is all about offering beautiful essentials to make the everyday things we do, even better. These power-packed devices are developed for young and socially active consumers who demand a stylish power-packed smartphone with a wide range of features to enhance their on-the-go experience.With the Nokia Lumia 720 and Lumia 520, we continue our focused and consistent design approach – Simplicity and Reduction, Colour and Craft.”

Nokia Lumia 720 has an award-winning unibody design and is powered by Qualcomm Snapdragon S4 Plus mobile processor optimized for the Windows Phone 8 experience. The highly responsive curved 4.3” Clear Black Display with super sensitive touch brings an innovative lamination process for wider viewing angles, and enhanced clarity in bright conditions thanks to software enhancements. Providing a rich entertainment experience, Nokia Lumia 720 includes Nokia Music, the HERE location suite, and the option to add wireless charging with a snap-on wireless charging cover. The sleek and stylish Nokia Lumia 720 delivers a high-end camera performance at a mid-range price point. A large f/1.9 aperture and exclusive Carl Zeiss optics are designed to deliver bright, sharp and clear pictures at any time of the day or night. The HD-quality 1.3 megapizel wide angle lens is perfect for taking group portraits with friends or making video calls. Along with powerful hardware and Nokia digital camera lenses including Cinemagraph, Smart Shoot and Glam Me, the Nokia Lumia 720 makes it easy to capture and share stunning pictures.

Nokia Lumia 720 comes with the HERE suite of applications, including HERE Maps, HERE Drive for free turn by turn navigation and HERE Transit. Nokia Music offers unlimited music streaming, free of adverts or subscription charges, it also includes the ability to download playlists to listen offline. With NFC connectivity, music can easily be streamed from the Nokia Lumia 720 directly to NFC enabled accessories such as the JBL PlayUp portable speaker, simply by tapping the two devices together. Available in 5 eye catching colours yellow, red, cyan, white, and black, the Nokia Lumia 720 will be available in the market  in mid April.

The Nokia Lumia 520 is Nokia’s most affordable Windows Phone 8 smartphone, delivering rich selection of innovations taken from the Nokia Lumia 920 and Nokia Lumia 820. Powered by Windows Phone 8, this fun and colorful addition to the Nokia Lumia family contains many of the features as its high end siblings including the same digital camera lenses, as well as maps and navigation from HERE, free music streaming and a four inch super sensitive touchscreen for a highly immersive smartphone experience.  Digital camera lenses transform the 5-megapixel autofocus camera on the Nokia Lumia 520 into a fun way to capture pictures and share memories. Cinemagraph adds motion to still images that can then be shared with friends on Facebook, Twitter or via email. Smart Shoot lets people create the perfect group picture, taking multiple images and selecting the best facial expressions from each, or even remove people from the shot. The easy to use Panorama lens captures super-wide-angled photos to take in more of the scene.

With Windows Phone 8, Nokia Lumia 520 also provides a more personal smartphone experience. Pinning playlists, HERE routes, Web-pages and documents direct to the Start Screen as Live Tiles makes it easier to access favorite content, while PeopleHub brings all social media notifications and messages into one convenient location. With Xbox, 7GB of free online SkyDrive storage as well as Microsoft Office with Outlook, Word, Excel and PowerPoint available out of the box, Windows Phone 8 makes the Nokia Lumia 520 one of the most powerful smartphones at this price point. With an 8GB mass memory and expandable 64GB memory slot, Nokia Lumia 520 also allows to store a wealth of content created and collected. Nokia Lumia 520 is available in yellow, red, cyan, white, and black and with changeable shells, and will be available in the market in early April.