AMD today officially AMD FX 9000 series processor, the model presented as the first processor in the world to achieve 5GHz.

AMD also took the chance in E3, rather than Computex, to unveil new products for games: AMD FX-9000 Series processor. In this case, it should be noted that the 5 GHz speed boasted is not on a native frequency, they are achieved only via Turbo Core mode 3.0, that is to say, when certain conditions are met.

The AMD FX-9590 is clocked at a maximum of 5 GHz, the AMD FX-9370 with a maximum of 4.7 GHz. Native frequencies are not provided, nor the TDP or tariffs. We only know they contain 8 cores of Piledriver, and we can deduce that, they are really only variations of the swift FX-8000, launched in response for the new Intel Haswell processors. 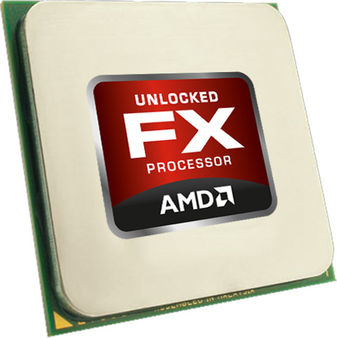 According to internal documents which have been escaped from AMD, the TDP peak is at 220W. This is why it would reserve integrators because they need a motherboard and a specific cooling system. For comparison, the maximum Turbo Boost for Intel processors is 4 GHz for the Core i7-3970X, 1 GHz or less, for a TDP of 150W.