Conversations on Facebook can now be enhanced with images and photos, posted directly in the comments following the publication. The function will initially be limited to versions of Web service time.

The social network is preparing to deploy the effect of an update of the interface that will, when responding to a publication, send a photo to the servers, the same way it is done when it is displaying an image on its own wall. The function has not yet been integrated into mobile applications dedicated to Facebook, which means that it will initially be accessed from the web version, on a computer or mobile.

The updated profiles, the field that allows you to post a comment is now accompanied by a small visual-shaped camera with which you can select an image to associate it with the message. So far, Facebook allows images to JPEG or PNG formats, but refuses GIF or animated images. We can also associate a single image to the comment.

The idea was born at a hackathon organized by Facebook, an event that brings together professional and amateur developers in order to bring out new ideas. “When I talk with my friends, sometimes a picture helps me to tell a story rather than with just words. If we talk live, I can show a picture on my phone, but on Facebook I should post a link to a photo. Now you will be able to attach a photo directly when you post a comment” explains the Bob Baldwin network, indicating that they had been with several other developers behind this achievement. 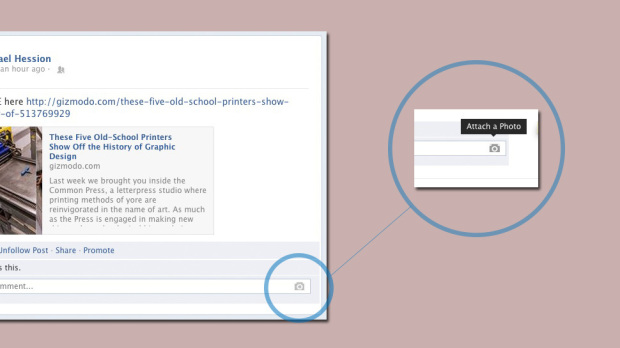