MediaTek could launch the first eight-core ARM processor at the end of July.

MediaTek prepares the first ARM SoC with eight cores in the market that can operate simultaneously. It is revealed from the extracts of a roadmap and internal presentations which sources from a Chinese news website, which is now put everywhere in the news.

These documents do indicate that MediaTek plans to launch a new MT6592 SoC in July. Manufactured in 28 nm TSMC, it comes with a 8-core ARM Cortex-A7 CPU clocked from 1.7 to 2 GHz and a GPU decoding the future HEVC codec up to Full HD 1080/30p support.

This chip would not be the first eight cores, but this is the first in which they could operate simultaneously. As its name suggests, the Exynos 5 Octa opened on Samsung Galaxy S4 in U.S. embarks eight cores. 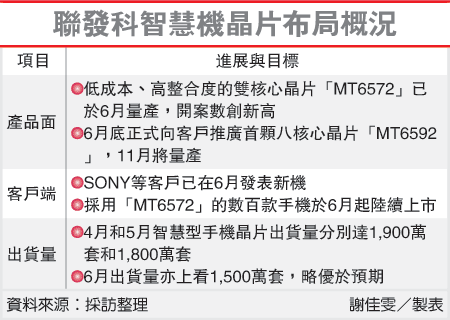 According to preliminary performance tests (benchmarks), the MediaTek SoC eight cores would be somewhat more efficient than Samsung, but slightly less than the Qualcomm Snapdragon 800 (30,000 against 28,000 and 33,000 points on AnTuTu 3.x).

MediaTek has nevertheless found an interesting approach in terms of price/performance ratio on the marketing plan. It can be expected that the low-cost devices will adopt it in early 2014.