Google focus alone 25% of Internet traffic in the United States, the Deepfield company says. This is more than Facebook, Twitter and Netflix combined in total.

Google weighs 25% of web traffic in the United States, reveals a study from Deepfield. There are just three years, this share was only up to 6%, it argues. If Netflix has a bandwidth more important than Google, Deepfield notes however that the streaming service reaches its peak a few hours in the day, mainly in the early evening.

Deepfield ensures that more than 62% of connected devices share the traffic on Google’s servers. The company said that taking into account for smartphones, PCs, tablets, connected TVs and other gaming consoles Google Web requires huge capacity infrastructure network terms and huge investments, with more than 600 million dollars on average for each of its data centers. 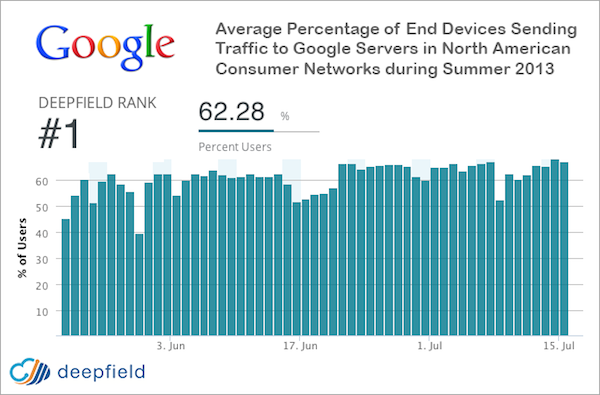 This rapid growth in three years can be explained by taking into account the Android market, its mobile operating system with 900 million users worldwide, as well as through the acquisition of YouTube in 2006, the hearing has increased significantly since then. Besides, of course, historical segment, the search engine, which accounts for 65% of the market in the world with over 3.3 billion daily queries.

Deepfield based its study on the ongoing analysis of traffic on WANs, through a large part of North America. The company has also collaborated with a representative sample of 110 ISPs.