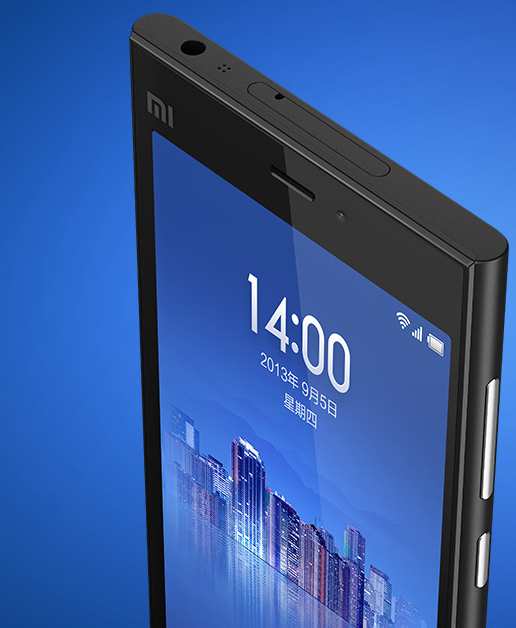 Xiaomi last Thursday announced the renewal of its high-end smartphone. The renowned Chinese manufacturer launched Mi3 who succeeds Mi-Two phone that was launched a year ago and again enjoys some world premieres.

This new high-end smartphone, which has nothing to envy against the western smartphones, is actually the first to embark on a Qualcomm chip MSM8974AB, an improved version of the famous Snapdragon 800. With this chip there is also Adreno 330 GPU that passes from 450 to 550 MHz, RAM LPDDR3 of 800-933 MHz with four Krait 400 cores clocked at 2.3 GHz.

Depending on the cellular network, the MI3 can also embed a Nvidia Tegra chip that consists of a 4 to 4 CPU cores at 1.8 GHz and a GPU with 72 processing units. Combined with 2GB of RAM and 16GB of internal memory, it would offer similar performance in both cases.

The Xiaomi MI3 also adopts what is the best on the market for smartphones. It comes with a Full HD IPS 5-inch (440 pixels per inch) screen that has the distinction of being super sensitive, that is to say, it can be operated with gloves.

It also has 13 million pixels sensor at the back based on the process stacked by Sony’s CMOS Sensors and wears an objective lens equivalent to 28 mm f/2.2 and associated with two LEDs provided by Philips.

The Xiaomi MI3 will soon be marketed in China from 2000 to 2500 yuan with 16 to 64GB, the equivalent of 250 to 310 euros. Xiaomi is distributed in Asia, but its products are attractive enough to be offered by some importers.