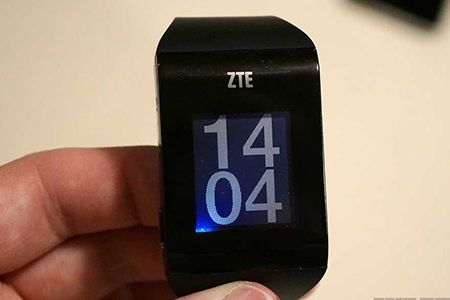 The manufacturer ZTE is alive and well in the halls of CES with multiple products. After its range of smartphones and tablets, it is the turn of the accessories to be put forward, and the manufacturer took the opportunity to unveil its smartwatch and a strange projector.

ZTE has benefited from the show in Las Vegas to introduce its BlueWatch a smart watch that looks strangely close to the famous Pebble that more or less started the trend around these portable devices.

The Bluewatch has 3 buttons on the left edge and one on the right (again, like Pebble) and uses a magnetic USB cable to ensure its load. Its display type is black and white e-paper which is almost identical to the Pebble, however it is to be noted that the illuminating function is pretty "cheap" because it is not a backlight, but a LED in the lower left corner of the watch.

Regarding its features, it is capable of receiving and displaying notifications, use the pedometer, locate the smartphone and also control music playback with almost all basic functions common to smartwatches at the moment.

ZTE has already announced that this was the first watch that boards well for a more complete collection and many variations. The company presented its Bluewatch as a "Beta" which shall have motivation to be marketed soon. No price has been disclosed.

ZTE has also surprised with its new Projector Hotspot, a module being twice the size of an iPhone and has various functions. As its name suggests, the device acts as a hotspot for extra projector, but also external battery and media server.

It embeds a 5000 mAh battery capable of charging a phone (from its USB socket), includes a LTE hotspot capable of supporting up to 8 connected devices and a pico projector for projecting film with a display equivalent to 120 inches (3 meters) diagonally.

On its top, Projector Hotspot has a touch screen and Android interface that allows the dissemination of accessible content from Netflix and other streaming services. To complete its equipment, it has an HDMI jack, USB ports as well as a headphone jack.

ZTE said the device would be capable of delivering several movies before its battery fails, without announcing the autonomy more precisely. No availability date or price has been disclosed yet.