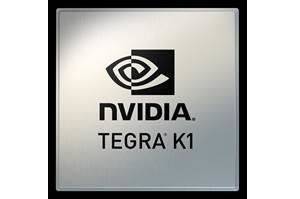 Nvidia Tegra K1 processor announced at CES 2014 in Las Vegas looks promising in the first benchmarks which is the opponent to mobile market solutions.

As the beginning of each year, NVIDIA unveiled its next-generation Tegra mobile processor for smartphones and tablets equipped with new generation but with an even greater this year for the automotive and aircraft consoles.

After a Tegra 4 announced early in 2013 it took several months to reach the market and has struggled to impose the family, Nvidia announced the next generation that bears the name of Tegra 5 but rather Tegra K1 to make the jump performance getting achieved.

Because the Tegra K1 platform embeds core ARM Cortex-A15, and later special core 64-Bit, it is also and especially with a graphical part in Kepler architecture and Support Mobile Cuda, giving it a big power graphic treatment.

The first devices running Tegra K1 Cortex-A15 ARM version should be available in the first half of 2014 but first product was already visible on the CES 2014 show in Las Vegas. The smart "monitor" of Lenovo ThinkVision 28 which supports 4K and can run Android 4.3 Jelly Bean is equipped with a Tegra K1 processor. 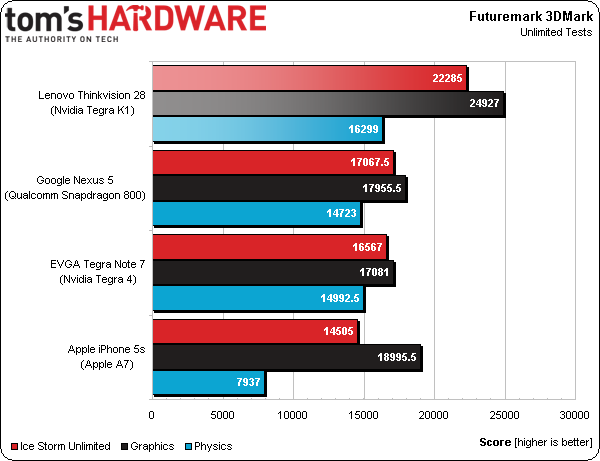 The site Tom's Hardware took the opportunity to test several benchmarks on its configuration based on 4 core ARM Cortex-A15 clocked at 2 GHz and associated with a 500 MHz companion core, and its graphic part 192 Cuda cores.

A benchmark like 3DMark and 720p operation to allow a comparison between chips, the Tegra K1 processor gets a result up to 25% higher than current chips, the Snapdragon 800 Qualcomm, Apple A7 ot the previous generation of Tegra 4.

Note that the Snapdragon 800 Adreno features a 33x graphics processor while the future Snapdragon 805 moves to a Adreno 420 which, with its support 4K, should bring a jump performance measure that will face the new chip Nvidia.

With GFXBench, the test also shows a performance gain for Tegra K1, while it displayed a score of 33917 points AnTuTu with operational constraints 28 and the Lenovo ThinkVision management screen 4K.

This disparity of device types and performance look is also the weakness of this first comparative performance but nevertheless it seems that Tegra K1 extended the race for power in the area.