Giant Samsung has announced two new Exynos 5 processors during the MWC 2014 in Barcelona, one in octa-core configuration, the other in hexacore, and both can handle qHD resolutions.

Samsung is still waiting on the 64-Bit, while competitors have begun to reveal their plans, it is first of all two new Exynos 5 processors, and therefore 32-Bit, which are announced during the MWC 2014 in Barcelona.

The Exynos 5422 processor belongs to the family of Exynos 5 Octa and is present in the high-end range. Based on the octa-core configuration it consists of 4 cores of ARM A15 running up to 2.1 GHz and 4 core of ARM Cortex A7 clocked up to 1.5 GHz, all organized in a little-big architecture of HMP (Heterogeneous Multi Processing or the "true" octa-core) and promising improved version by one third compared to the previous generation of Exynos 5 Octa performance.

The processor is able to handle resolutions of 2560 x 1600 pixels and 2560 x 1440 pixels and uses a method that saves fixed display elements and addresses directly the mobile components, reducing data transfers required and consumption energy (process already put forward in the form of G-RAM as per LG Electronics on its LG G2 smartphone). 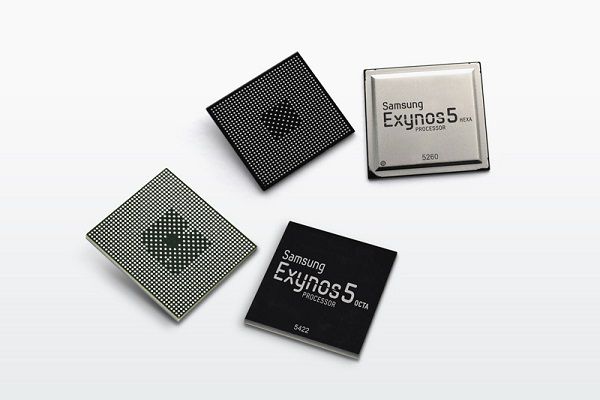 The Exynos 5422 processor is also able to handle 4K video playback and enjoys a 28 nm engraving that promises a 10% reduction in energy consumption compared to similar SoC 32nm. The new processor comes into mass production from the first quarter 2014.

Samsung also formalizes the Exynos 5260 processor belonging to the new family Exynos 5 Hexa and is none other than the famous hexacore processor phablet called the Galaxy Note 3 Neo. It is intended to midrange devices and offers a configuration based on two ARM Cortex A15 cores 1.7 GHz and  4-core ARM Cortex A7 1.3 GHz under little-big architecture for HMP as required.

The Exynos 5260 Hexa proceseur has already being started in mass production.