The evad3rs team publishes an update of its jailbreak tool evasi0n7 1.0.7 for iOS 7.0.6 devices. It fixes a failure to update the list of Cydia packages.

After iOS 7.0.6 and correction of SSL blunder, Apple does not offer yet a new version of its mobile operating system. Yet evasi0n7 – already compatible with iOS 7.0.6 – has indeed entitled to a new update on its side.

For jailbreakers, it is thus a maintenance update which aims to correct a bug. It is only necessary for those who are experiencing this issue where package lists are not properly refreshed or updated in Cydia. 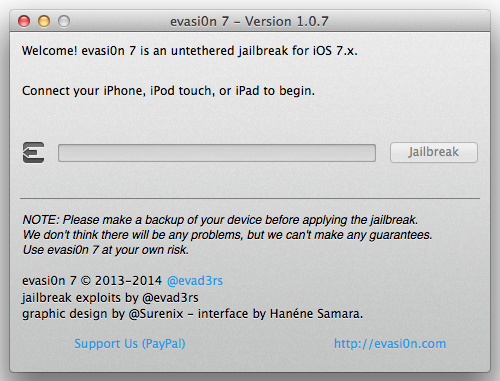 Cydia is an application for the iOS devices that provides access to applications outside the App Store, not digitally signed by Apple.

Those who meet the concern mentioned above are invited to restore their device via iTunes before resorting to evasi0n7 1.0.7 in its version to jailbreak again.

A new maintenance release for evasi0n7 but no clues on iOS 7.1 that approaches ahead or not.