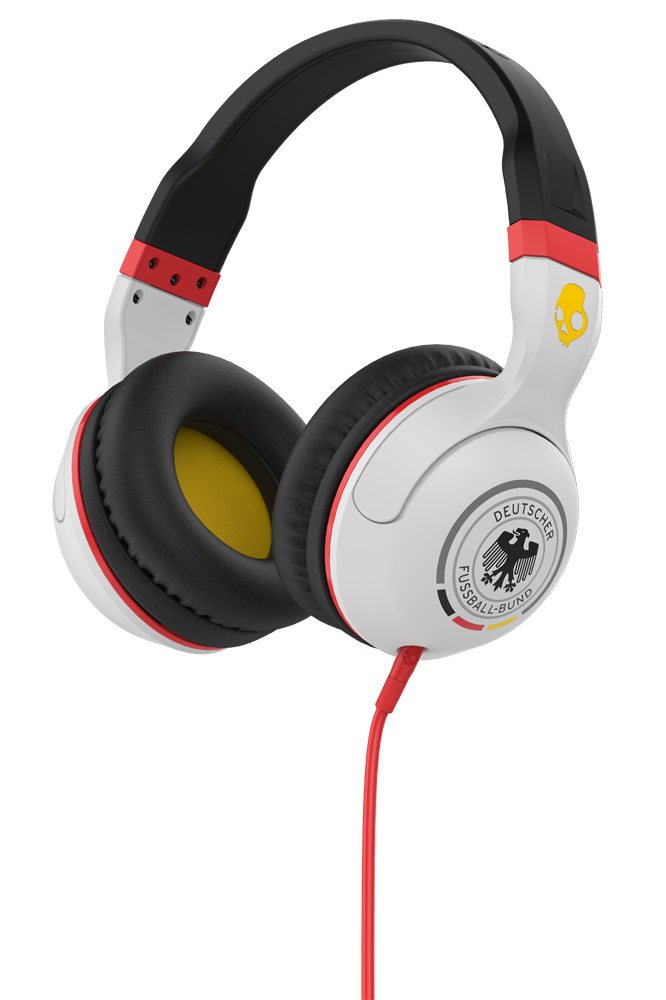 Skullcandy, the original performance and lifestyle audio brand, affirms its position in international football by producing a range of licensed headphones for national teams competing in the 2014 FIFA World Cup Brazil.

Skullcandy Football World Cup Series brings together three of the world’s most emblematic football team under one roof: England (FA) and Germany (DFB) and France (FFF). Get ready to experience the music of football with the headphone/earphones of the team you are in the league of. Be a 'true' fan that yearns the 'living' experience of football. It is not about being a mere spectator — it is about being a participant.

1)      Uprock:
Skullcandy's Uprock musical burn unit brags twin 40mm drivers, tangle-proof flat cables and a mixed-material composition sturdy enough to deal your beats and withstand opposing jerks, drops and hustle without breaking. Don't mistake the ergonomic design, soft-touch finish, and plush ear pillows for weakness – this headphone thrives on around-the-clock rocking. True to its urban dance-based namesake, Uprock is the ideal tool of engagement for synchronizing music with your daily routine. Plus, you can keep your colors correct without losing your shirt. MRP: Rs. 2,899

2)      Hesh 2:
In what might be seen as a radical uprising, the new Hesh 2 has arrived as an innovative upgrade from its iconic predecessor. The new aesthetic is both sleek and simplified, while the conical over-ear housing drives an even more powerful sound. The Attacking Bass, Natural Vocals, and Precision Highs build a pure audio experience for any genre of music – though we recommend one that’s congruent with rebellion. Use the Mic1 to connect with your cohorts, or to switch up the track. Proving that even the rebellious evolve, the Hesh 2 is Supreme Sound with the usual antics. MRP: Rs. 5,299

3)      Ink’d 2:
Leaving an undisputed mark on critics and believers alike, this popular bud has been re-shaped, re-tuned and re-produced for true fans. Complete with Supreme Sound, the Ink’d 2 is a remix worth hearing for yourself. Supreme Sound delivers Attacking Bass, Natural Vocals and Precision Highs. Flattened Cable for style and durability are some of the prominent features. MRP: Rs.1,549

All the products from the series are available for the following football teams:
1) England (FA)