The technical features of the Samsung Galaxy Mega 2 phablet are leaked on the web.

The Samsung smartphone with large format called Mega was launched during the first half of 2013 and it will soon have a successor. In any case a benchmark has beend revealed in circulation on the Internet, where its environment also evokes Android 4.4.3 KitKat with some technical characteristics.

Responding on behalf of Samsung Mega 2, this smartphone would be based first of all on the Qualcomm Snapdragon 410 platform (evolution of Snapdragon 400 bringing 64-bit and 4G/LTE) with a quad-core 1.2GHz processor, 2 GB of RAM and an Adreno 306 graphics part. 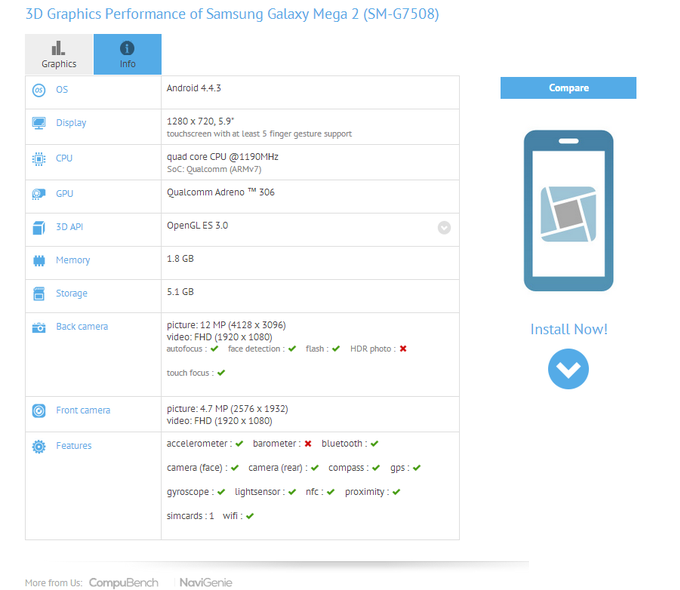 It would also provide a screen of 5.9 inches (and perhaps another bigger, like the first Galaxy Mega which offered 5.8 or 6.3 inches) with a resolution of 1280 x 720 pixels, 4G/LTE compatibility (nothing is said about it, but the platform integrates Qualcomm) connectivity of Wi-Fi 802.11n/Bluetooth 4.0/NFC/GPS, a 12 megapixel digital camera with LED flash and a 5 megapixels webcam. Finally it would have a flash memory of 8 GB expandable with a MicroSD card.

An announcement is foreseen for the third quarter in the coming weeks or so.