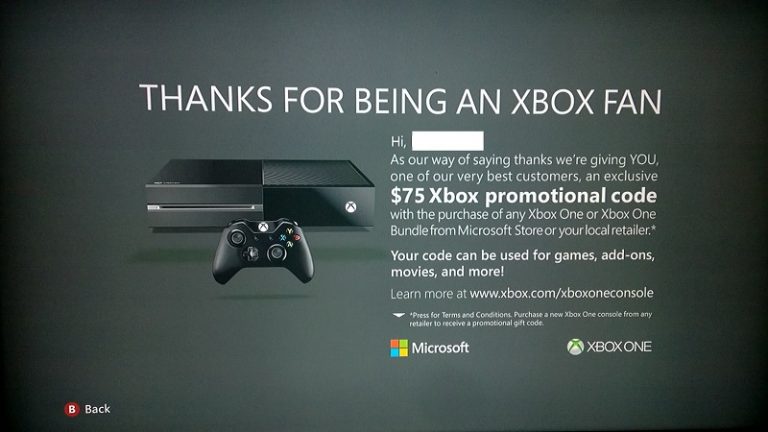 To enrich its installed base of Xbox One, Microsoft has introduced a promotional offer to provide a discount of about $75 for current Xbox 360 owners if they buy a new console from the manufacturer.

Microsoft seems determined to use all means necessary to ensure the flow of Xbox One. In fact, the manufacturer has recently proposed a bundle without Kinect to provide a console for the same price than the competition (399 euros).

The Redmond company also aims to encourage the current Xbox 360 owners to replace their console with Xbox One. Indeed, a member of the NeoGAF forums has highlighted a promotional offer that has seen its television when his recently connected to Xbox Live to play Halo on X360.

It is a question about a discount code of $75 to purchase Xbox One from Microsoft Store or dealer participating in the operation. This offer allows you to buy games, DLC or other content on the Xbox One.

According to information relayed, this offer is required to purchase a console between 7 July and 31 July 2014. The code will be sent by 15 August. Remains whether this offer is restricted to the U.S. or all public.