While we should soon know more about the successor of Moto X, Motorola Mobility could prepare a Droid Turbo model carrying a Snapdragon 805 processor and a qHD screen.

Motorola Mobility has already sent invitations to a press event early in September, which is expected to unveil smartphones like Moto X+1, Moto G2 and also formalize smartwatch Moto 360. But there may be another model in preparation and would position on the high end.

Motorola Droid Turbo smartphone is mentioned in screenshots and could join the list of the first smartphones with qHD display. Bearing the XT1254 reference and the reference Quark_Verizon, it would board a 4.6 inches display with resolution of 2560 x 1440 pixels and a Qualcomm Snapdragon 805 platform with Adreno 420 graphics, coupled with 3GB of RAM and 32 GB of storage space. 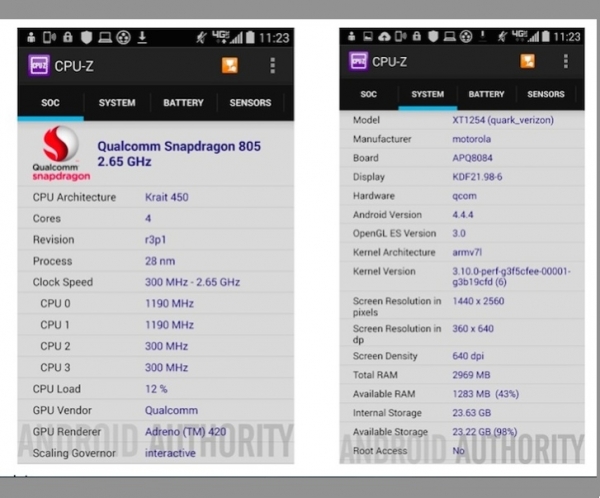 Android Authority, which publishes screenshots, remains cautious about its truthfulness and is surprised at the screen data which would have the density to 640 ppi. Still, that Motorola XT1254 is mentioned in the pages of the Bluetooth SIG certification, which confirmed its existence, failing to confirm its exact characteristics.