Few weeks ago there was some news on the new LG curved slab screen. It will now be soon available in the market. Here is the passage price.

Under the IFA in Berlin, which was held in early September, LG introduced several devices, including a 34UC97 monitor. LG put forward its curved slab that is intended to afford greater immersion, whether in movies or video games.

More recently, the South Korean manufacturer supplied information regarding its distribution. As such, LG 34UC97 screen would be available in October. The official price is set at 1299 dollars, which should result in 1300-1500 euros after conversion and once the various taxes applied. 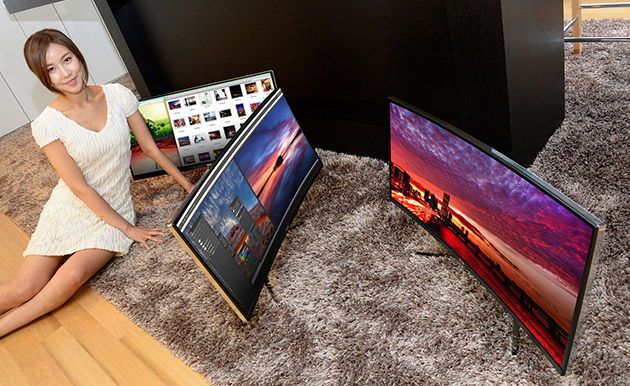 As a reminder, the LG 34UC97 monitor offers a diagonal of 34 inches in a ratio 21:9 and a definition of 3440 x 1440 pixels resolution on an IPS panel for angles of 178 degrees and an extra audio system. For connectivity, we found the Thunderbolt 2 which will allow chaining, as part of a multi-screen configuration.

Other notable technologies: 4-Screen Split, which divides the display into four distinct areas, and Dual-Link Up, which manages two sources simultaneously (PC and smartphone or PC and camera, for example).