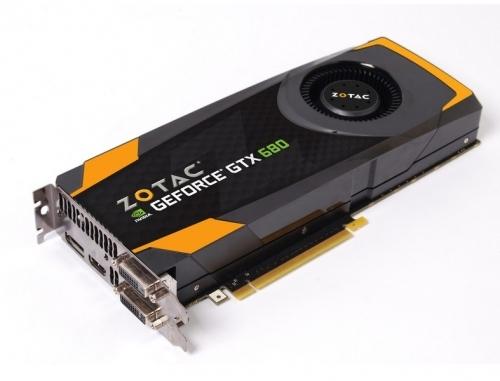 GeForce GTX 680 is a high end gpu for extreme gaming performance. The gpu is designed to give maximum performance. It is a expensive graphic card. For high end gaming system, there is always a confusion which card would give you the best output. Will it offer multiple display and graphic settings or not. Zotac GeForce GTX 680 is build on Nvidia’s 28nm architecture with improved high definition output. Along with regular display, you can get benefit from integrated 3D configuration that has default settings plus customization options. The design does not put much effect, but the card is bit heavy in weight. This is because of internal heatsink which is bigger and better. That is a single fan at the front side. Most of the gpu’s comes with single fan support only, but what matters is a proper combination of heatsink and fan ventilation. So that the gpu can stay cooler at maximum performance.

Compared to budget cards that comes within price range of Rs.8,000 to Rs.15,000 Zotac GeForce GTX 680 is better. The market price is around Rs.32,000 which occupies a major part of your pc budget. Also do not expect to run on your regular motherboard. GTX 680 features PCI 3.0 interface which is also available on budget boards, but the performance output will be reduced due to low bus speed. GTX 680 specs reveal that it is a 256bit GPU. Rampage IV Extreme X79 is my favorite board. SLi & Crossfire ready support helps you to use multiple GTX 680 gpu at a single time. The setup and configuration is very simple. Just hook the card and then install Nvidia 306.97 Windows drivers. That’s all the card is ready to perform.

GeForce GTX 680 is next generation gpu. For gamers it is offers wide choice of features to play on single or multiple screen. The card is costly but it is worth to buy. I am sure this will be one time purchase for your gaming need. For important features that are highlighted about this GPU is, 2GB GDDR5 Memory, Nvidia Physx, DirectX 11 and SLi ready. All this features comprises of a powerful gpu which is capable of giving detailed textures and output. GDDR5 is a high performance RAM. There is not a great difference between GDDR4 and GDDR5. The expected data operation can be counted @ 3.6GB per second. There are many other variation of GeForce GTX 680 by Gigabyte, EVGA, ASUS, etc. 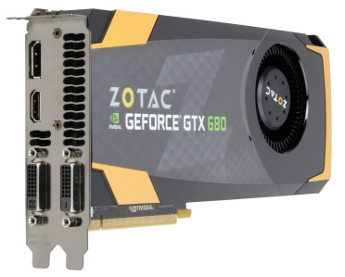 The benefit of buying a high end gpu like GTX 680, is that you can use multiple monitor on the single one. This card has 2 Dvi, 1 HDMI and 1 Display Port. You can arrange VGA To DVI type converters for HDMI and DisplayPort also. The default driver setup offers Nvidia Control utility through which you can configure optimum resolution with few clicks. Performance point of view the card needs a good system. I am here talking about overall hardware. The motherboard, ram, process and power supply. Or else the performance can bottleneck. 256bit ram is high bus rate, and if your system lacks the similar configuration then you will not get better output. The current core comes @ 1006Mhz factory clock rate while Gpu boost technology can increase that to 1058. A few gain of Mhz can improve the game output better. 1536 Stream processors are capable of giving detailed hd output.

There are two 6 Pin PCI power connector on the below side. You have to connect both to the psu and if you are using a older power supply then a additional 2x molex-to-pcie cable is provided. One thing this GPU lacks is all set of cables which must be provided by the manufacturer. As it is not a budget gpu, it is an expensive one. So the manufacturer can provide a set of all cables which include converter cables also. This would save a bit money in buying those adapters from market. Another important things, it is recommended that you run the game on Windows 7. I found it more stable compared to Windows XP.

Design :
Zotac GeForce GTX 680 has wide design with fan in the front. The card is heavy and has 4 slots on the backside. It must be properly hooked with tight screws as it is quiet heavy and you cannot leave it hanging over PCI slot. There are two power connectors. If your system does not has 4pin PCI power cable, then you can use molex-to-pcie power cable which comes with the card. It works properly and there is no worry for power errors. The card is packed is nice attractive box which is quiet large in appearance. With tag line It’s Time to Play! Zotac clearly shows up the idea of high end gaming instantly. To test Zotac provides you Assassin’s Creed game pack. I had played it for some while and quiet happy with the output. Event at maximum settings the game works flawlessly. The font on the top front side is very low on noise. While playing game, I notice that the temperature stays at stable value. It gets a bit heated while playing the game for some hours or putting it on a benchmark test. The card power consumption is also stable.
You can connect 4 monitors on the signle card. You can add 2 device of DVI, 1 HDMI and 1 DisplayPort on the same. The installation is tricky but not so complicated. It is recommended to use a even size monitor on all of them. Or else the resolution will not be so effective. I had possible configured 4 21” monitors on the single card and the display output maximum was quiet awesome. But as monitors comes with thick border, it ruins the game play.
Specification :

The specification above can provide you a overview what feature the gpu offers. Now it matters how the gpu can perform compared to other. I had tested the same on different games and found awesome output. All latest games can peform flawlessly. Depending on the output resolution the game performance changes. The gpu temperature remains at acceptable rate while playing game. It is recommended that your psu must be 600 or higher. Graphics cards like GTX 680 offers you additional features like GPU boost and AA models. GPU boost technology offers high clock rate in case of need only. If the game needs higher processing, the boost technology increases the gpu speed for time being.

Conclusion
Though a expensive graphic card, GTX 680 is powerful graphic card. System built on this card, is capable of playing high definition and 3D games. With appropriate adapter you can configured HDTV and additional monitors. The best part of using this gpu, is that it is very easy to manage. There are no complex settings that might confuse you. But if you are not having a high end system then it is not recommend to go for this card. On initial purchase Zotac GeForce GTX 680 comes with set of Assassins Creed Game Pack. There are three games which are Assassins Creed, Assassins Creed 2 and Assassins Creed Revelations.