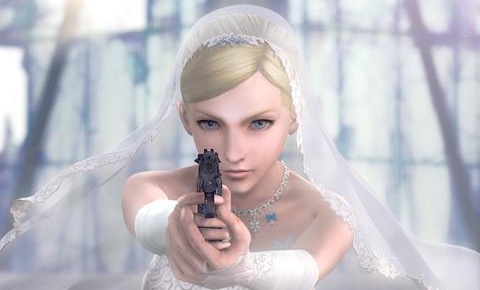 The game developer Square Enix is still very active on the PSP, has reserved a special place for The 3rd Birthday this year. We have already saw new Dante in DMC or the new Lara Croft of Tomb Raider, that in spite of having a huge number of deliveries, leave aside the continuing opportunities to focus on the full revival of the title. Now, with the new title Aya Brea, the heroine of the Parasite Eve series makes return, in a supercharged GST that has left us a very good impression. She is back on the consoles of the last ten years after Parasite Eve with the very different gameplay that we had experienced in past, with a new title and a platform that was not predictable by us.

Parasite Eve that is based on a novel by Hideaki Sena, the game could be classified into the survival horror genre that at that time was on its particular Boom, through the publication of the second part of Resident Evil. Though, Parasite Eve also had RPG elements largely discarded in this type of security. The very 1st trailer for The 3rd Birthday was revealed in late 2008, already announcing the renaissance of a very popular license with players, but the project really began to be presented to the press at E3 2010. Now the PSOne Parasite Eve series seems moving towards the RPG’s and survival horror, The 3rd Birthday placing its 100% on the frantic third person action genre.

Up to now seemed to come the way of Aya, the title appears to die and was buried the series in spite of a good reception from critics and gamers. All seemed beyond until a few years ago started the rumors of a probable resurrection of Parasite Eve. The main PS3 looks were positioned in two generations of consoles could offer a mainly interesting contrast in many ways. The first surprise came when they ran the first rumors that the title raised out on mobile platforms. After some time, seeing the amount of the project at hand, they lastly chose to call the Sony laptop as fortunate that it obtained the new adventures of Aya.

As happened with the first delivery, again New York City has been chosen to become accustomed in the Christmas season. The year is 2012 when in the Big Apple underground start to come into view a series of well-like alien creatures which wipe out the city. A GST, therefore, takes place on Manhattan Island in New York on Christmas Eve in 2012. The story takes place after the two Parasite Eve, but the narrative should return frequently on past events to help novices understand all the ramifications of the scenario. We discover an Aya Brea who seems to have changed a lot and based on all the hopes of mankind. It is indeed the only one compatible with a new technology called Overd, a power capable of neutralizing the Twisted, a life form of unknown origin that spreads across the city. It evolves in environments completely ruined by the actions of these creatures even more deadly than earthquakes in sets of doom.

This is the beginning of 3rd Birthday, an exciting adventure in which the time line plays an important role, where past and future have conflicting elements, and where Aya’s dreams are intertwined in a mysterious and intriguing history. Also included are old acquaintances from previous installments. But Aya Brea is not alone in The 3rd Birthday. Now a member of the ITC (Twisted Counter Investigation), it is backed by a group of soldiers whose presence will allow it to exploit the astonishing capabilities Overd. This can be accessed at any time during the game, is to seek an ally in the neighborhood close enough to project into his body away and teleport to where it is located. In this way, we can not only move at the speed of light to escape a trap, but also benefit from the soldier’s arsenal targeted by Overd and the position he occupied. On screen, you can see the gauge of life for all soldiers in the area and move from one to another at the right time to avoid dying.

This system, quite confusing at first sight for a GST, is incredibly effective in this case. It gives tactical gunfights really interesting and counterbalances the apparent fragility of heroin. The latter did not have less of an arsenal Therefore, with the possibility to choose between 4 different weapons at any time to spray the twisted repugnant .The controls have been prepared in a fairly simple and very efficient. With the L button allows access to a menu to switch between 4 types of weapons we can carry on each mission. Generally we will have a gun with unlimited ammo plus three weapons you can choose from before the last catapult. These weapons have several characteristics that make them unique as are the range, hitting power or stability, among others. As we move forward in the game can be unlocked a few more using our Bounty Points (present in previous releases of Parasite Eve), which eliminates win creatures.

Continuing with the controls, the gameplay is presented as a “lock and shoot” and may well fix the enemy with the R button and shoot left and right by pressing the square button. Although this kind may arise easy combat, almost all of the enemies cannot be settled only with a thorough discharge of ammunition without leaving the site. So we can move at the same time we fix the enemy and fired, look for coverage and we cover different parts of the stage or use the X button to roll on the ground as a movement to escape.Finally, the big improvement, or say the strong point of the gameplay that has 3rd Birthday is based on the ability of the protagonist named Overdive.

The interface displays a gauge that fills the release over the clashes and that, once full, allows you to run a sort of desperate fury impossible to describe on paper. Not content to offer a really addictive game system, The 3rd Birthday benefits in addition to an exemplary and a scenario that promises to yield major revelations about the character of Aya Brea. Nor should we forget that the soundtrack is signed Yoko Shimomura, composer of renown to whom we owe already OST Parasite Eve and the first of the series Kingdom Hearts. The design of the protagonist and the various characters and soldiers will find is great and the scenarios are quite different at the same time a have a good level of detail within the scope of the notebook. A special mention Aya design through the various battles and their perfect appearance becomes a set of clothes torn and wounded in the style of John Mclane. For their part, the animations flow recreated in an excellent manner with a great development in detailed issues as the retreat of the weapons.

The 3rd Birthday draws on the legacy of the Parasite Eve series but is not totally recount. The 3rd Birthday can be very dissimilar from what we had used in the Parasite Eve series, this title being a shooter, pure and straightforward where we have to abolish certain enemies to go forward to the next area in a row. Make no mistake; the novel adventures of Aya is a very superior action game for Sony’s handheld, with a quite high difficulty and thanks to innovative gameplay Overdrive. But we can as well say that the linear evolution situation, the large number of shots and more shots can be a kind of title is raised somewhat repetitive after a few hours of play for some users.

This genre has been chosen winning into account the portable media that was intended, and as the developers themselves have said, there are plans for a possible delivery of Parasite Eve on PS3 with most similar in terms of gameplay to past deliveries. The return of Aya Brea will be sited beneath the sign of the action mode and GST will shock fans of the genre with its system of Overd truly delicious. While this comes, Square Enix gives us a good action title on PSP, by way of Aya as actors and with lots of mysteries to resolve.