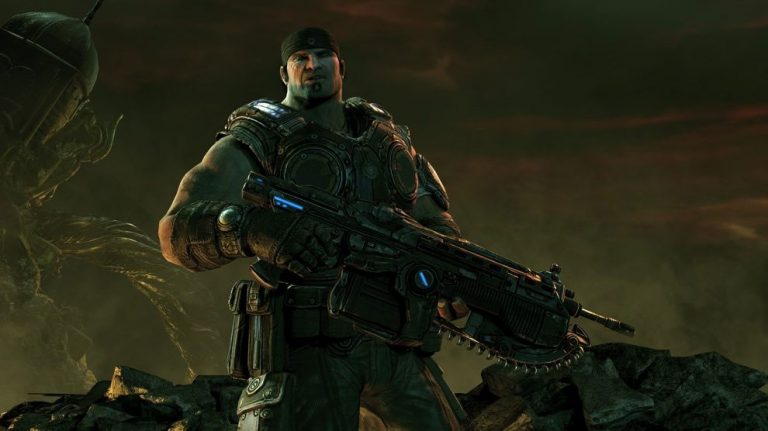 Ace Combat: Assault Horizon is the newest installment in the Ace Combat series. It looks even more realistic and spectacular as compared to its previous episodes. Ace Combat is a series of video game -like simulation aviation began in 1993 , featuring aerial combat, inspired by real events such as World War II , the Cold War and the Kuwait war of 1990 among others. Each album has been developed by Namco , who has edited some of them, sometimes leaving that task to Sony or Atari .

Gears of War 3 is a shooting game developed by Epic Games and published by Microsoft Game Studios . Initially scheduled for release in April 30, 2011, the game has been postponed until the fall of the same year for marketing reasons . Since its first installment, the series has used a successful formula based on the use of large graphics engine, in the detailed shaping of some scenes that catch the eye just started the adventure and above all in a spectacular gameplay, whose main virtue is in its set and progressive difficulty curve that makes the user feel an evolution in the game but never frustrated. Gears of War 3 will have a cooperative mode for up to 4 players to engage in adventure and simultaneously introduce Anya as a playable character. It is expected that it will also launch five multiplayer maps. In terms of new weapons, it has been playing with a heavy sniper rifle with laser sight, a shotgun sawed off the extremely long reload time can kill two opponents at once if we are really close its targets (almost in contact), and a small submachine gun.

Batman: Arkham City follows its previous episode Batman: Arkham Asylum that has been developed by Rocksteady and edited by WB Games . It is an Action Game and is in development on Xbox 360 , PlayStation 3 and PC. The history of Arkham City would take place one year after Arkham Asylum. Quincy Sharp, former director of Arkham Asylum , has appropriated the capture of the Joker, and has used his fame to get elected mayor of Gotham. Like Arkham Asylum and the Jail Blackgate can no longer serve as a place of detention, Sharp bought a large part of the slums and arming mercenaries of a group called Tyger to create “Arkham City. The prisoners are brought to Arkham City to live in freedom, provided only that they do not try to escape. To monitor the city, the psychiatrist hired Sharp Hugo Strange , who has more personal plans for the city. Batman also closely monitors the city, worried at the idea that the situation can escape them. The project plans “Arkham City” are also visible in a hidden room in the office of Sharp Arkham Asylum.

Driver: San Francisco is an Action Game developed by Ubisoft Reflections and published by Ubisoft . As its name suggests, takes place in the city of San Francisco . Martin Edmondson, the creator of the game, listing more than 300 kilometers, making it one of the largest environments ever seen in a driving game. Several famous places of the city are reproduced, as the Bay Bridge . The player controls Tanner in his coma and performs multiple missions through the streets of the city. A new gameplay mode is the “Shift”, which allows Tanner to teleport from one vehicle to another and continue its mission. Walking the old driver was left out deliberately to concentrate on driving, and over 120 vehicles available. A multiplayer mode will also be available with the Shift mode.

Tom Clancy’s Ghost Recon: Future Soldier is the 5th installment of this Action Packed series that is developed and Published by Ubisoft. The intention behind the next installment of the Ghost Recon license is to make us see the future of combat. That’s why developers have worked with the Natick, research service and development of the U.S. Army. The result is the application of latest technology in this series that gives us the opportunity to lead a platoon of special forces soldiers invariably deployed far behind enemy lines. In this case, it will fight a coup for Russian ultranationalist who filed head of government. Also be noted that the main season begins in the skin of a worker whose factory oil undergoes a raid. Then we will become one of the bodyguards of a politician kidnapped. Only in the third movement of the game players take on the super-lattice “of a member of the Ghost Recon squad.

Ghostbusters: Sanctum of Slime is an action shooting game for Xbox 360, PS3 and PC scheduled for 2011. It has been created by Atari in collaboration with Sony Pictures. Ghostbusters: Sanctum of Slime is basically an adventure multiplayer game and ghost chase for upto 4 players that will submerge you in the heart of a fresh mystical experience. The players equip themselves for their proton pack and take the role of a new rookie team Ghostbusters to save New York City for a disaster of proportions ‘Goulet’. The action-oriented gameplay will evolve as the intrepid beginners will explore a series of haunted places that must be drained of their ectoplasmic menace.

Max Payne 3 is an Action Shooting game developed by Rockstar Vancouver for the American publisher Rockstar Games. The game takes place 12 years after the events of Max Payne 2: The Fall of Max Payne , while Max has left New York and his job in the police. Indeed, it is a good time party in Sao Paulo in Brazil and will be involved against his will in a case of murder and treason, he will again take up arms to get out of there. This time the hero is little changed physically. He is now bald, with a well-kept beard and chocolate chips are now replaced with a small can of beer. Max is once again faced with cases of treason and murder and must speak the powder!

Metal Gear Solid: Rising is a game of the saga Metal Gear , being developed by Kojima Productions and will be released on Xbox 360 , PlayStation 3 and PC . The storyline takes place between Metal Gear Solid 2 and Metal Gear Solid 4 . The game was announced by Hideo Kojima at the press conference of Microsoft at the E3 2009 , and presented in more detail at the press conference from Konami. A few weeks before the official announcement, Kojima Productions has launched a website equipped with a timer, which showed various letters and numbers, and two images of characters, Big Boss and Raiden. Hideo Kojima is not involved much in the game’s development and emphasizes the episode Metal Gear Solid: Peace Walker .

Similarly like Red Faction showed its unique features and Space Marine did the same, MindJack Time came to show another skills that you hope to attract the gamers attention and can disassociate themselves from the strong competition in the market. Mindjack is an action shooting game on Xbox 360. A new era of technology propels humanity to its golden age. The game is set in 2031, a time when companies have overcome the barrier and control the world government through the latest technology. We take the role of Jim Corbin and use our skills to hack minds “and escape the oppression of the rulers. You will join a team of agents / spies to fight and expose to light the mystery that threatens the survival of entire people. The graphics are quite far from the triple AAA being something forced even some animations.

Many years after the events of the last episode, the surface of Mars became uninhabitable, and finally returned instead. So, it is again in the mines experienced by Martians, but the buggers will get a funny surprise by digging too deep. By dint of scraping, miners dig up finish in effect by a kind of alien that will infect the entire colony in just three days. All this despite the fact that the planet is far from pacified, in other words, it is a sacred dawa up there. The air of nothing, this change of context is important because it implies the end of the open character of Red Faction Guerilla in favor of a game more confined. Even if the thing has not really been addressed in detail during the demo.

Spec Ops: The Line on PC is a shooting game in the third person that puts you in the shoes of the leader of a small force of undercover responsible trace of a colonel in the U.S. Army. The game is the ninth installment in the long-running Spec Ops series and it set to release sometime in 2011. This adventure takes place in the streets of Dubai totally devastated by powerful natural disasters. The city is now buried under the sand and also serves as a battleground for armies that do not want the property. The Line is primarily a third-person shooter with emphasis on squad-based tactics. The player controls Captain Martin Walker who is accompanied by a Delta Force bravo team to rescue a U.S. Army Colonel who remained behind in Dubai.

Thor: God of Thunder is a future 3rd person action single-player game based developed by Sega and co-written by Matt Fraction. The game is scheduled for May this year on Xbox 360, PS3 and PC. Experience a spectacular, epic-scale original adventure in Thor’s first standalone game as he battles through numerous worlds of Norse mythology to overcome monstrous foes lifted from the pages of the comics. Wield Mjölnir, Thor’s legendary hammer, to fight enemies on an immense scale while controlling the elemental storm powers of lightning, thunder and wind to vanquish foes. Battle against legendary enemies including Ulik, Ymir and Surtur in conflicts that span realms ranging from primal worlds of fire and ice to extraordinary planets inhabited by Frost Giants, Trolls, and other monstrous denizens.

Warhammer 40,000: Space Marine is a 3rd person Action game for Xbox 360 Scheduled for 2011. It contains human elite soldiers, modified and equipped with the latest technological refinements, and fighting at the peril of their lives the dangers that threaten humanity of the Imperium . Space Marines is a great action title, for now you will be completely surrounded by many enemies while constantly shoot and shoot with one of 15 different weapons that we use and which may improve with use. Take it off our sword with which to feature from our enemies in two literally. You’re in the skin of a space marine and you will fight many Orks and Tyranids. To do this, you will have in your arsenal of a bolter, a sword energy, a chainsaw, etc.. All in action furious, frenetic and violent typical Warhammer.