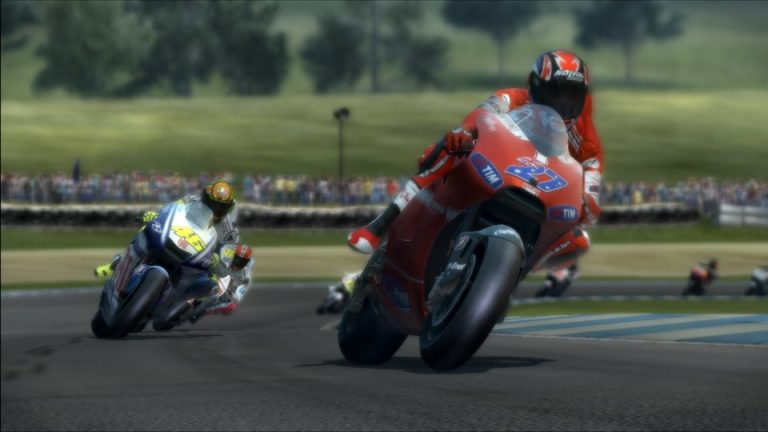 Since it was made under license from Capcom MotoGP in 2007, there have been two developers who have dealt with it. On one side of the first two installments were responsible for the Italians Milestone, with disappointing results and the long shadow still very close to the MotoGP from THQ, which were the very best that has been playing in this genre of driving. Last year, after a couple of years of development came MotoGP 09/10, with the help of the English Monumental Games, a studio founded by some ex-members of Climax, creators of THQ’s MotoGP deliveries for Xbox, which despite not to receive bad reviews did not live up to what fans expected, much less lovers and fans of two wheels who wanted to lay hands on a good simulator.

This year, after testing a beta version a month ago the thing painted more or less the same as the last issue, and did not appear to be able to love those who seek the more realistic side of the sport. But after playing the final version thoroughly and examine the settings of the driving aids, we found that disabling all-or nearly all, the game feels very realistic, with a performance of the bike and the rider fairly convincing and although the physics are improved, we believe that this time it will convince anyone looking for a simulator, and as was the case last year, also those who simply want to enjoy a hassle-free arcade.

Simulator or arcade, you choose

Nothing more start the game we want to ask what difficulty between the four available. These differ in aid that come enabled by default and the difficulty of artificial intelligence-controlled rival console, at a high level, they become very aggressive, too far-fetched perhaps, but very funny. Although we are given a choice between these four levels, at any moment we can manually configure the aid that we want to be enabled, which is highly recommended, especially for someone who is familiar with motorcycle games or looking for some realism.

Traction control brakes, anti-wheelie, folding machine, weight transfer and transmission are some of the aid that we may change, and the truth is that much noticeable when playing, being something of a simulator if especially disable traction control, with which we will go to the ground in the curves in more than one occasion. Each player can set the game to your liking, but it’s worth messing with driving aids as the gameplay changes a lot depending on configurations, turning the title in an arcade or simulator. We can also play other mechanical parameters of the bikes, as the tire, change the gearbox differential relationship of the various marches and modify related data ranging from suspension damping and stiffness to the wheelbase , being a fairly complete mechanical options that will please the most experts in the field.

Although the title put 10/11, as last year goes on sale without the updated data to the new season begins this weekend in Qatar, where there has been some interesting changes as the signing of Rossi and Stoner’s Ducati or Honda. Although it is known and confirmed that the patch will update the data to the 2011 season, still do not know when, and hopefully not so slow as in the previous title, which came nearly four months later. It is interesting to note that in this case we choose from the beginning to all pilots of the three categories -125, and MotoGP Moto2 to play in any way, not like last year you had to unlock them, obviously a mistake

We have the World Championship mode, in which contest competition or only one race on the track you want in any of the three categories Challenge, formerly known as Arcade and where checkpoints must be overcome as speed games old; Attack, stinging our to get the fastest laps in each of the circuits and finally Multiplayer, with the possibility to play online racing for up to 20 players.

But undoubtedly the most interesting and we’ll take more hours is the history. We create our driver with your name, dorsal, native local circuit and the team which will compete, and also can choose to customize the design of the bike, helmet and overalls. We will begin competing in the championship with 125 and before starting a race we have to choose the difficulty, the number of laps, the tire wear and the difficulty of rivals. According to several of these points or money parameters obtained at the end of the grand prize will be multiplied more or less. This is not the only factor to take into account, since according to how they do it in every race we assessed, taking positive factors that we are joined at the front, tow and clean sections, and others who remain as collisions, overtaking suffered and the use we make of the second chance that comes back and we can use to retrace our steps if we blunders (and no one is forced to use and safer than many appreciate at some point).

Get good jobs as we win more money and more sponsors will offer to promote us, if the contract and comply with their requirements, which often exceed a certain position, we reward you with good amounts of money. We hire diverse staff and press officers “that we get better sponsors, and especially the senior engineers, who are the ones who can improve our bike. Once we have hired one or more the will to investigate the improvement we want to do on the bike, a task that occupied several days, depending on their expertise or the amount of them to get to work side by side, and then we to buy to buy and install in our vehicle, and faithfully pay the salaries of staff hired.

In racing so interesting are also added dynamic objectives that arise during the course and asking us to get before the end of a countdown certain challenges such as reaching a certain speed, be faithful as possible for several meters to drawn to guide, advance to rival that indicates or even intimidate us, which is pretty funny. As one of the great innovations can play the story mode with a friend, as a second player can be recruited by our team and run the races on a split-screen cooperative. When the season is over we will receive bids and if we have done well enough upgrade will give us, with the ultimate goal to win the MotoGP championship. No doubt a very fun and itchy, and small are appreciated manager options that give some variety, a success.

In general we can say it has enough modes to avoid boredom, shooting hours if we are to enjoy the online multiplayer, but what is most important is that the gameplay options that can allow us to modify it a long term game, because as we go picking skill and playing more can choose to disable some help and have more control over the bike, which multiplies the difficulty but also the fun. There are things even better in the gameplay, such as not convince us off the track on the land, and collisions with other bikes are not penalized perhaps they should, but with this release Capcom seems to have found the right path and is a base excellent on which to grow the franchise, and of course, about to start to enjoy from now.

A strong and effective, though not dazzling graphic section

Visually, though not surprised at any time for its great graphical effects, with some textures modeled quite modest and humble about the bikes and bikers, has the great virtue of moving up to 27 motorcycles without breaking a sweat, which in itself is admirable . The speed at which it moves is really high, and when we compete in MotoGP so much that even what may seem unreal, something that we do not take as we have not ever ridden on one of these beasts to 200-odd, but it seems one of the highest speed sensations we have enjoyed in one game speed.

Particularly noteworthy is a detail, in addition to asphalt quite accomplished, and how it was recreated when it rains the water splash bikes, very colorful and convincing. Despite this, we miss more success in other details that seem a little sloppy, as the setting of the circuit a bit poor, in a sport that makes it great its legion of fans, “or the overall game menus, austere and impractical. Would not have been more than some kind of sequence when we got on the podium, or unlockable extras in the form of videos or history of motorcycling, so expect a little more care by the bikes in subsequent releases.

Meet sound effects, and a good surround sound system and the volume at full blast the feeling of being stuck in the middle of a race is convincing listening very well when the bikes come from behind and differentiated well the three displacements. To guide us through the game we have the voice of the classic Castilian narrator of TV’s more than cars, which is not the first time is heard in a video game, “and the music has undergone a change of pace and melodies we’ve gone from electronic rockers some not very inspired. We like a “Cantaditas”, not the quality of our special composition or gender predisposition, but to remind those mythical Sega arcade games like Daytona USA, where members could listen to songs while playing.

While the previous episode failed to meet a part of the public in part for being away from a simulator and be more of an arcade, for a not very convincing physical and discrete graphic section in general, for us this year liked most and has done a great job, being an evolution of more profound than might appear at first sight. In the right difficulty is quite demanding and realistic, but never the fun side, and we can make the game at will by touching the various aids. Whether you want an arcade as a simulator here we can find, even a mixed bag, leaving clear that under no circumstances we face the most realistic motorbike game in history, nor intended, it does provide a good balance between fun and simulation, with an addictive and long story mode, and believe that any motorcycle lover should give least one opportunity.

In general, it appears as though Capcom has well-read few lessons from previous episode. The simulation style apparently didn’t attract the interest it required from the masses, and hence instead has reverted offering the option of an arcade mode to the gamers along with the capability to really convert the game to go with their own skill level. In addition, it is a game with a sharp knowledge curve and there are no shortcuts to mastery – a lot similar to motorbikes themselves except with staying power and insistence the rewards for devotion are great. MotoGP 10/11 is going to get the greater part of race fans, including those who have played the previous episode, some getting used to as they fight back to get to hold with the new handling model.