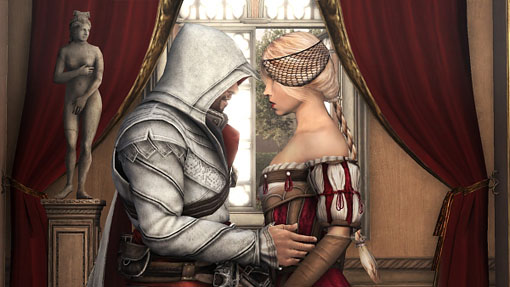 After enjoying more than 20 hours of Brotherhood gameplay it is already clear that it is not a mere expansion of Assassin’s Creed II. As a full game and multiplayer modes, the DLC is the very important order of the day with some free downloadable missions that offer us a simple additional challenge or a new multiplayer map. The DLC names as “The Da Vinci Disappearance” gets more complete as the stabilizer for both campaign to the multiplayer. The Brotherhood already has its first expansion in the market, and with it we can enjoy new adventures for Ezio.

The Da Vinci Disappearance is by far the best DLC that the series has generated so far. Two to three hours for an essential added in the campaign and also adds whole multiplayer. This DLC in an must have adventure packed with extra character or a few additional missions. As we saw in games like Alan Wake, Dragon Age and Mass Effect 2, or the recent Severed Dead Space 2, are always much more interesting additions that impact directly on the plot, the most fruitful that work as an epilogue, or as a link with the next installment. And here Ubisoft has not fallen short, although this only appreciate having as main motivation of plot development in the present because as added Ezio’s life has little to teach.

With the demise of Da Vinci, enjoy the best additive for which the series has enjoyed so far, with a compact amount added in all fields of the original one. A complement to the campaign to be released from the third memory in story mode. We can surely have fun for 2 to 3 hours in exchange for 9.99 euros or 800 Microsoft Points with few new characters, unpublished missions, with added multiplayer mode and two new locations, seamlessly integrated with the rest of the experience of The Brotherhood .First it should be noted that The Da Vinci disappearance is a very complete title in terms of content, and that adds to the experience off-line, and multiplayer. Regarding the aspect of play together, the DLC offers two extra modes and a new map and some characters that add to the range of options.

The map, in fact is the Alhambra in Granada, a precious and very elegant location that will delight the Brotherhood fans. Plenty of indoor and outdoor areas overlap with extraordinary good taste, and a design mapped to various vertical levels which increases the interest of the online experience. But what really captivated the attention of fans of this aspect of the game is joined by the aforementioned addition of two ways: Escort and Murder. Completely focused on Leonardo Da Vinci, his life and his works, with constant winks and dissatisfaction with the smile of the Mona Lisa or subtle references to the history with his assistant Salai, this rescues DLC characters, not only important during the main plot as Lucrezia Borgia and his mistress, but very much forgotten side of Assassin’s Creed II.

Now let’s get to the exact content. The additional half hour of play is divided into eight different new missions that can be said as both action and assault, fighting hand to hand, as the pure observation of the evidence of Truth, and of course, seepage areas and in two new locations, one outside and a new crypt. This slightly changes the feel of the game and somewhat suggestive of the first of the trilogy of The Sands of Time. All this with comes with 10 additional achievements or trophies.

We can now choose 4 new characters and two new modes, one of all against all in which not tell us to kill the Templar under a contract but we have to find out us. And the second way is in which two teams of four are secured to escort or to assassinate a VIP target. The controversy comes with the new scenario, the Alhambra that is actually set aside by Ubisoft for multiplayer. In fact, the beginning is very special with the hook to what is to come, with an exciting start and frightening conclusion.

Along the way we have a handful of exploration missions, assassination and time trials, which are not particularly out of the canons of the saga but did bring a fun and exciting entertainment for a reasonable duration. Perhaps the only thing that can make the drawbacks are the missions difficulty for a limited time, rather than the challenge posed by some elements who have just left out of our control and that can sometimes ruin the experience.

Overall ‘The Da Vinci Disappearance’ is a very complete DLC for everyone. Whether you’re desperately hooked on the multiplayer and need to enjoy new ways to develop the original idea, or simply want to play some more with Ezio, although it is necessary if you want to be familiar with everything about what happens outside the Animus. What is especially appreciative is that we do not feel cheated, as happened with Assassin’s Creed II which very well could have taken place in the game.